Graduating in a pandemic may lead to long-term income losses 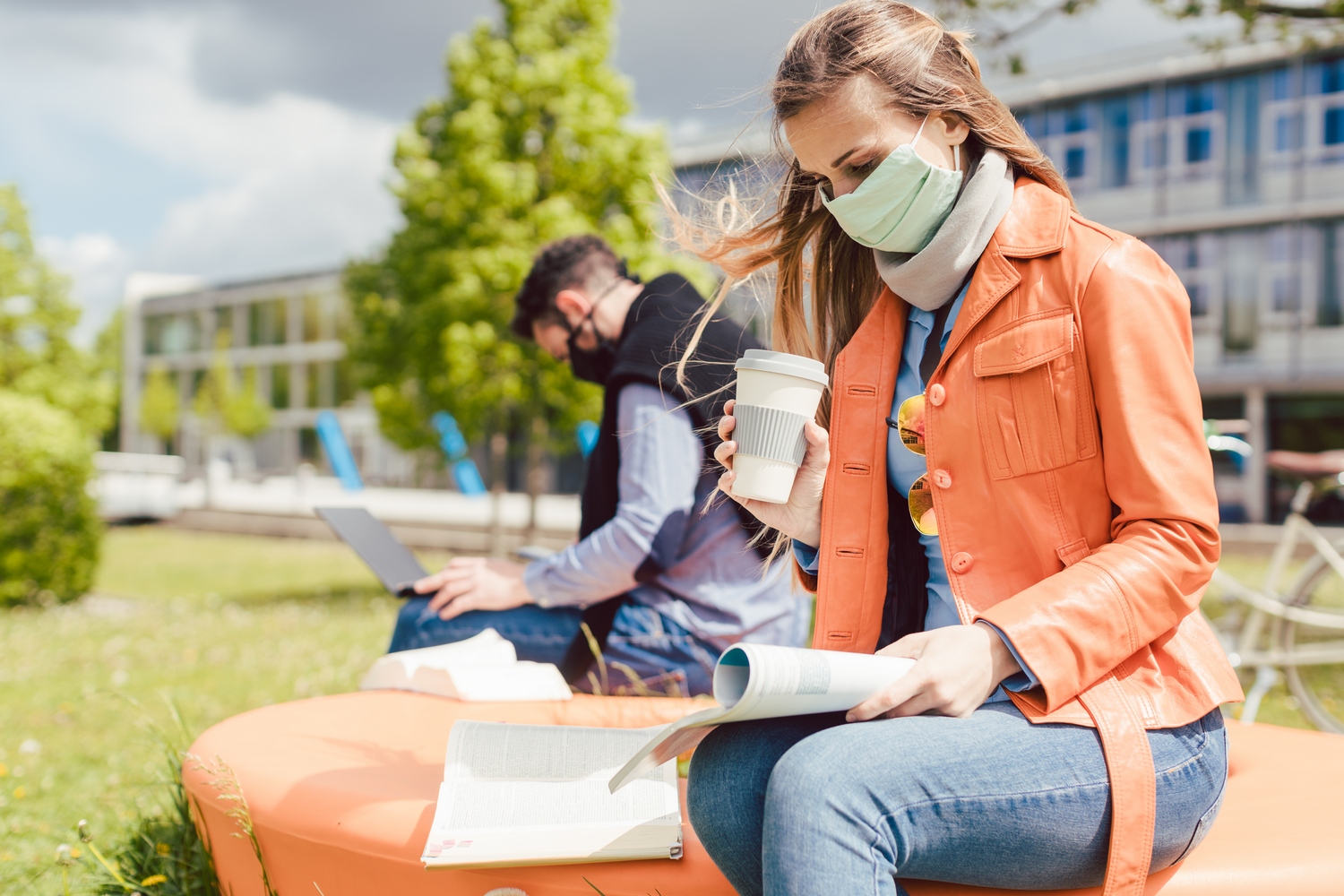 In 2019, times were rosy for job seekers. Employment reached a record high in Germany since 1990, and the U.S. job market was the strongest in 50 years. Then the coronavirus hit the world and caused the most severe economic crisis in modern times. Jobs disappeared at an unprecedented rate, with U.S. unemployment rising to 14.2 percent in April and only slowly recovering to about 10 percent at the end of July. Even in Germany, which has so far weathered the crisis fairly well, almost 635,000 jobs have been lost year-on-year in July 2020.

For young people unfortunate enough to graduate during the pandemic, this is a bleak outlook. Fewer job opportunities will make school-to-work transitions difficult, possibly imposing large and long-lasting losses. IZA research has repeatedly shown that graduates who leave school in a recession earn substantially less in their first jobs. Although earnings tend to recover after a few years when labor market opportunities improve again, a large gap in lifetime income remains. For example, an earlier IZA paper based on Canadian data from the 1980s and 1990s suggests that a 3-4 percentage points higher unemployment rate at the time of graduation results in average losses of 5 percent in lifetime earnings.

What are the expected effects of the current pandemic on recent graduates? The latest wave of the IZA Expert Panel asked labor economists from about 50 countries how they believe the COVID-19 crisis will affect labor market entrants in their countries. 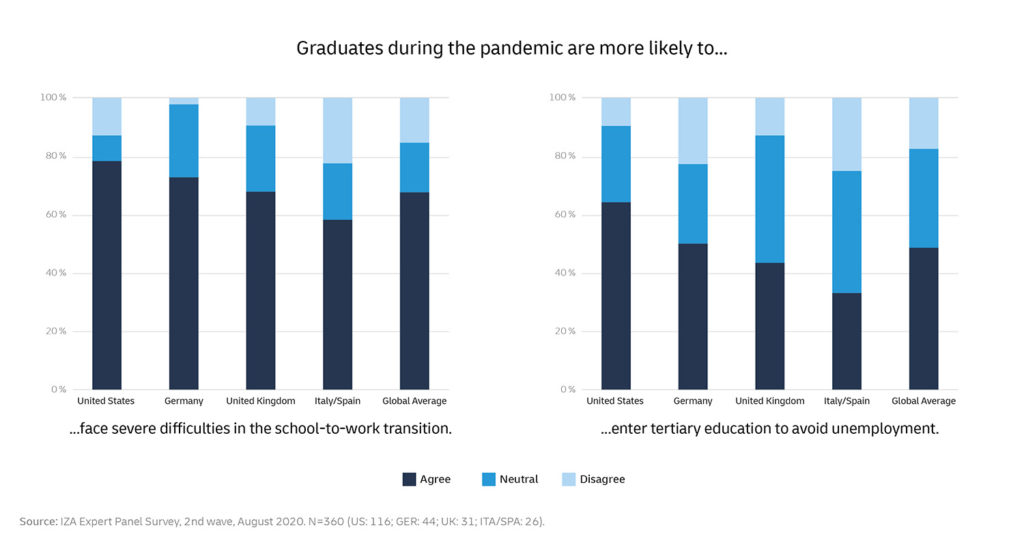 The analysis shows that more than two-thirds of the experts expect 2020 graduates to have greater difficulties in the important school-to-work transition than previous cohorts. Remarkably, both U.S. and German experts are more pessimistic than the average, whereas labor market researchers in Italy and Spain provide a slightly more optimistic outlook. While the survey does not shed light on the reasons for these country differences, a possible explanation may be that the latter countries had already faced high youth unemployment rates before the crisis. In contrast, U.S. and German job markets for graduates were exceptionally strong in previous years, which could make a larger drop appear more likely.

Moving on to tertiary education is an option for young people to avoid unemployment in a tight job market while at the same time investing in their human capital to improve future earnings prospects. This option seems to be particularly relevant in the UK, where more than 60 percent of the surveyed experts believe that secondary school graduates will be more likely to enter tertiary education. 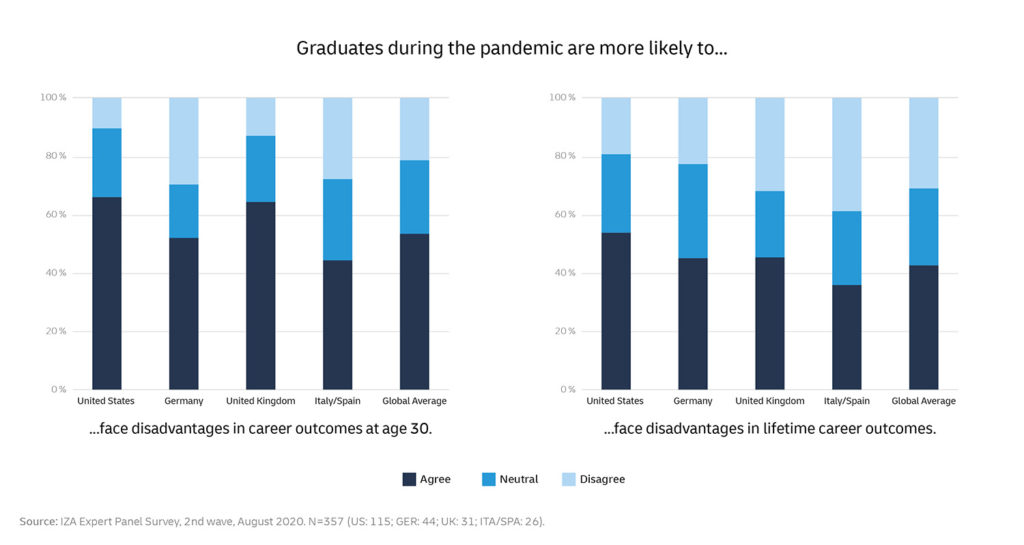 Regarding the longer-term impact on career outcomes, the experts (particularly those from the US and UK) expect significant disadvantages at age 30 for those who graduate during the recession. These negative effects are expected to fade over time, as reflected in the somewhat more favorable outlook on lifetime career disadvantages. Once again, respondents from Italy and Spain are less likely to expect large negative effects. As suggested above, this may to some extent be due to country differences in pre-crisis labor market conditions.

What can graduates in a pandemic do to make the most out of their situation? IZA Research Fellow Philip Oreopoulos from the University of Toronto provides some advice in a recent IZA World of Labor opinion piece. In addition to staying in education, he suggests volunteering as a way to apply one’s skills and gain experience that may prove useful in future job interviews. Nonetheless, recent graduates will likely need to be more mobile and flexible in their job preferences than previous cohorts.

Read more about previous findings from the IZA Expert Survey: