On the costs and benefits of international labor mobility: Interview with George Borjas 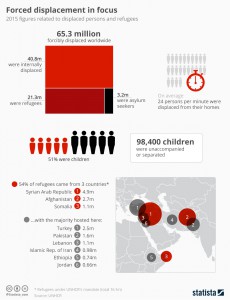 The drastic and unexpected increase in the number of people seeking asylum in Germany in 2015 has overshadowed the long ongoing discussion about amending the German immigration law. The current refugee situation has caused some to argue that such a reform is now obsolete. But, on the other hand, with refugee numbers beginning to decline, it could provide the opportunity to take up the discussion again and not yield the floor to right-wing populists.

Despite being one of the most popular destination countries of worldwide immigration since the early 1960s, Germany only introduced a half-hearted attempt at reform in 2004. The current law still falls short of well-defined qualitative and quantitative selection criteria.

We took the opportunity to ask George Borjas (Harvard University), one of the world’s leading migration economists and program director of IZA’s “Labor Mobility” research area, to comment on his perceptions and views in the debate.

IZA: Mirroring the polarized public debate, migration economists also have diverging views on the expected costs and benefits of increased international labor mobility. What is your take on this discussion in general?

George Borjas: This is a very interesting question that’s actually hard to answer. Whenever I think about international labor mobility, I tend to think of it in terms of economic models. So that means I have a particular methodological approach that sets up the question in my mind and that guides me to an answer. I do a lot of empirical analysis as well, but I usually look at the data through the lens of an economic framework.

Other social scientists, and even some economists, often look at immigration as a policy issue—which it obviously is—but that lens also determines how one frames questions and how one looks at data. The problem with this policy-based lens is that it is very easy for your own policy preferences to filter into the work and contaminate the conclusions.

Germany is in the midst of a public debate about how to reform its migration law. How can migration policy make a difference in extracting potential benefits from migration?

High-skill immigrants could potentially introduce knowledge and information that would spill over into other sectors of the economy, making everyone more productive. And high-skill immigrants would contribute more in taxes and require many fewer social services.

You have an upcoming release of a new book this October titled, “We Wanted Workers: Unraveling the Immigration Narrative.” How would you describe the key message for German readers?

The title of the book comes from a quote by Swiss writer Max Frisch. Looking at the guest worker migration into Germany and other Western European countries in the 1950s and 1960s, he quipped that: “We wanted workers, but we got people instead.”

I think a key lesson from this insight, which I develop in my new book, is that the “economistic perspective” on international migration—one that views immigrants as an army of worker-robots—is very misguided. Immigrants are people who have many other consequences on the receiving country, and the economic impact of those consequences could be far greater than the benefits that accrue from immigrant participation in the labor market.