Has Uber made it easier to get a ride in the rain?

Standing or walking in the rain is an activity best avoided. In New York City (NYC), when faced with such inclement weather, the demand for personal transportation naturally increases. During such scenarios, taxi drivers spend less time searching for customers and could thus earn a higher wage. Nonetheless, it has been a common complaint that it is difficult to find a taxi in the rain. 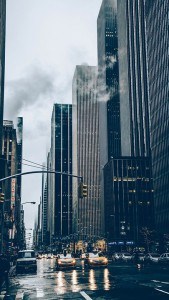 As an alternative to taxis, Uber entered the NYC market in May 2011 with surge pricing and mobile driver-passenger matching technology. Surge pricing means passengers pay a higher rate for the Uber service during times of high demand, which gives incentives to Uber drivers to provide rides in inclement conditions. Uber could thus be a logical response to unmet demand during poor weather.

Is it easier to find a taxi or an Uber driver in the rain?

The study also examines to what extent the increasing popularity of Uber in NYC is harming taxi drivers. The researchers found that the number of taxi rides per hour decreased by 8 percent after Uber entered the market. This result is consistent with a substitution from taxis to Uber cars.

Has Uber made it easier to get a ride in the rain?

The results have important implications for the ongoing debate on whether Uber is depressing taxi demand and whether Uber increases consumers’ welfare. In particular, they highlight that Uber is substituting taxi drivers and that surge pricing seems effective in increasing labor supply.