How deporting all undocumented workers would hurt the U.S. economy

Immigration issues are at the top of many western countries’ political agendas. The EU is still processing all of the ramifications of the refugee crisis. Illegal immigration was 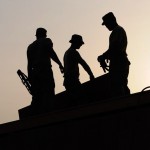 also a central theme during the U.S. presidential race. Donald Trump’s promise to deport “illegal immigrants” on a large scale was highly controversial, but this pledge touched a nerve with voters skeptical about the negative consequences of illegal immigration.

Now that Donald Trump has been elected, many are seeking to examine what this promise would mean in reality. A number of people, especially in the agricultural sector, are concerned about potential negative economic consequences that would be incurred if the unauthorized workforce were excluded from the labor market. But the virtual “invisibility,” at least in terms of official records, of these migrants and their work makes it difficult to assess their exact economic contribution without documentation across sectors.

A new IZA Discussion Paper by Ryan Edwards and Francesc Ortega of Queens College, CUNY, takes an innovative approach in order to estimate how the absence of unauthorized workers could damage the U.S. economy.

The main findings are based on a simulation using an industry-level model of the U.S., which is calibrated, i.e., adjusted in parameters, to observe present conditions. The authors then estimate certain counterfactuals, situations that have not yet happened and as such cannot be observed directly. They pursue the following thought experiment: what would happen if all unauthorized workers would suddenly be removed from the U.S. labor market (ignoring the obvious obstacles and costs related to such a large-scale deportation)?

The results highlight the substantial economic contribution of unauthorized workers to U.S. GDP. Edwards and Ortega estimate this economic share at approximately 3% of private-sector GDP annually. Amounting to close to $5 trillion over a 10-year period, this is comparable to the contribution to GDP of the whole state of Massachusetts.

These aggregate estimates, however, mask large differences across industries and states. Unauthorized workers may be responsible for 8-9% of the value-added in agriculture, construction, and leisure and hospitality. Naturally, their economic contribution is larger in states where these workers account for a large share of employment. For instance, the estimates imply that the economic share of unauthorized workers in California is around 7% of private-sector GDP in the state.

Compared to their shares in employment, the contribution of unauthorized workers to production is relatively smaller. The reason is that unauthorized workers are less skilled, on average, and appear to be less productive than natives and legal immigrants with the same observable skills. This may be a reflection of their more limited job opportunities.