Savings and political turmoil: The case of the Tiananmen Square protests 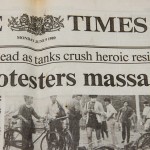 In a new IZA Discussion Paper, Rolf Aaberge, Kai Liu and Yu Zhu use the sharp increase in political uncertainty related to the Tiananmen Square protests in China. The event resulted in a change in political leadership and is widely regarded as marking the end of a period of rapid reform in China.

The political turmoil led to significant temporary increases in savings for the urban population in China, especially among older, wealthier, and more socially advantaged households. The average savings rate increased by 18 percentage points in the month of the uncertainty shock, mainly driven by reductions of the consumption of (semi-)durable goods.

These findings highlight the costs of political uncertainties: despite the temporary character of the Tiananmen Square incident, it led to long-run changes in household consumption. In situations of prolonged and ongoing political turmoil, the impact on household consumption is likely to be greater, offering an additional explanation of lacking economic growth in conflict-intensive world regions.