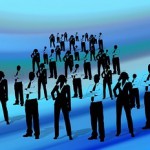 The gender wage gap is one of the most researched empirical facts in labor economics. But it is not only the biological sex that is related to wages. A small but growing empirical evidence documents how individual sexual orientation is related to significant differences in labor market success. Gay men earn less than straight men; lesbian women earn more than straight women. Still, the reasons remain largely unknown.

In an experiment with members of an online survey panel, the researchers set gay, lesbian and straight panel members to work on a simple mathematical task: finding the two numbers in a grid of eight numbers that add up exactly to ten. Participants were paid according to their performance. To measure their competitiveness, the participants could choose whether they preferred to get paid a fixed amount for each grid they solved or whether to compete against another participant in a tournament, earning more if they performed better than their opponent and earning nothing if they performed worse.

The results show that the competitive hypothesis by sexual orientation holds for men, but not for women. When given the choice of whether to compete, lesbians proved to be as competitive as straight women. By contrast, gays were much less likely to opt for the tournament than straight men, regardless of their grid solving abilities. When the experimental choices are matched to survey data on salaries, the researchers find that these differences in competitiveness can account for almost 40 percent of the gay penalty in earnings.

IZA Discussion Paper No. 9382 Do Gays Shy Away from Competition? Do Lesbians Compete Too Much? Thomas Buser, Lydia Geijtenbeek, Erik Plug