Should you come out in the workplace and would your employer care? 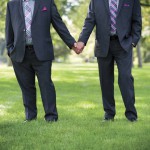 According to a report by Nick Drydakis published by IZA World of Labor today, half of gay and lesbian employees do not reveal their sexual orientation in the workplace for fear of discrimination and harassment.

The report goes on to say that while out gay and lesbian employees are happier or more satisfied in their jobs they are less likely to be promoted than their heterosexual counterparts. The findings indicate that gay men often gravitate to more female dominated professions while lesbians frequently thrive in male-dominated work places. In either scenario, out gay and lesbian employees are more likely to be bullied than their heterosexual colleagues. 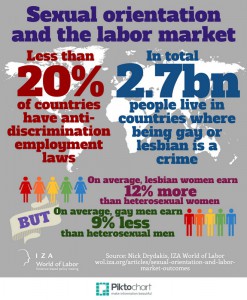 Workplace harassment can have serious mental health consequences for the individuals who are bullied or harassed and detrimental effects on the firm’s smooth operation. Gay and lesbian employees who can be open about their sexual orientation in a safe and diverse workplace are more productive, creative, and loyal because they feel more comfortable and safe.

The report suggests that government intervention to introduce employment policies that are clear and that apply uniformly to all employees, regardless of sexual orientation, would reduce workplace dissatisfaction and boost job satisfaction. Prejudice, stigma and discrimination are minimized in workplaces that have written equality policies and gay and lesbian unions.

These findings imply that legislative protection constitutes only a small step toward improving the employment circumstances and general well-being of people who are gay or lesbian and highlights the need for other policy intervention.

Read coverage e.g. in Daily Mail, The Mirror, The Telegraph and Management Today.