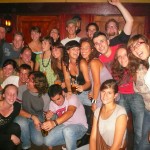 Despite the great popularity of international educational mobility schemes like the European Erasmus scholarship program, relatively little research has been conducted to explore their benefits. A new IZA discussion paper by Giorgio Di Pietro tries to fill this gap. Using a large dataset of recent Italian graduates, the paper investigates the extent to which participation in study abroad programs during university studies impacts subsequent employment likelihood. Di Pietro accounts for the problem that certain universities or departments might have a better reputation, which increases job prospects and the likelihood of sending students abroad. Moreover, the analysis addresses the problem that students studying abroad might simply be smarter than those staying at home. The results indicate that studying abroad has a relatively large and meaningful effect on the later labor market career: graduates who studied abroad during university are about 24 percentage points more likely to be in employment 3 years after graduation relative to their non-mobile peers. This effect is mainly driven by the impact that study abroad programs have on the employment prospects of graduates from disadvantaged backgrounds.