The labor market in Japan, 2000–2016: A role model for aging societies across the globe 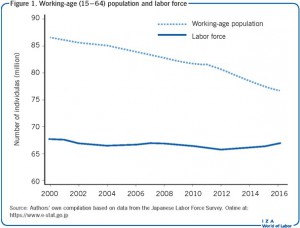 A new IZA World of Labor report looking at developments in the labor market in Japan since 2000 finds that despite a plummeting working-age population, Japan has sustained its labor force size, thanks to surging employment among women.

Aging populations pose challenges to the fiscal sustainability of many countries as a consequence of shrinking workforces and increasing costs for social insurance programs. As the third largest economy in the world and a precursor of global trends in population aging, Japan’s recent experiences provide important lessons regarding how demographic shifts affect the labor market and individuals’ economic well-being. According to IZA fellow Daiji Kawaguchi (University of Tokyo) and Hiroaki Mori (Hitotsubashi University), Japan’s experience exemplifies how rapid population aging affects the structure of the labor market through an expanding healthcare services industry.

The two economists found that despite the sharp decline in the working-age population in Japan, between 2000 and 2016 by slightly less than 10 million, the size of the labor force remained relatively stable during this period. The stability of the labor force reflects the fast-increasing labor force participation rate (LFPR) among prime-age women (aged 25−54). While the LFPR among prime-age women was somewhat stagnant during the 1990s, it rose by nearly 10 percentage points, from 66.5% to 76.1%, between 2000 and 2016. It is particularly in the Health Care Industry that Women’s employment increased sharply, by about 2.5 million. Consequently, about 21.6% of female workers were employed in the healthcare services industry in 2016.

The fast-growing elderly population appears to be a main driver of the rising employment in the healthcare services industry. Traditionally, healthcare sectors in Japan, similarly to those of many other countries, tend to employ more women than men. As a consequence, female labor force participation is increasing and more than one in five female workers are currently employed in the healthcare services industry. Japan’s experience suggests that population aging may have profound influences not only on the labor supply but also on labor demand.

The growth of the healthcare sector is a foreseeable development in aging societies and one that politicians need to factor into their labor market policies. Securing an adequate supply of healthcare workers and childcare professionals (who enable women to work) is a key policy issue. Carefully designed interventions in those industries may facilitate an efficient division of labor and help dealing with the problem of an aging work force.