Does immigration undermine social cohesion in the receiving country? 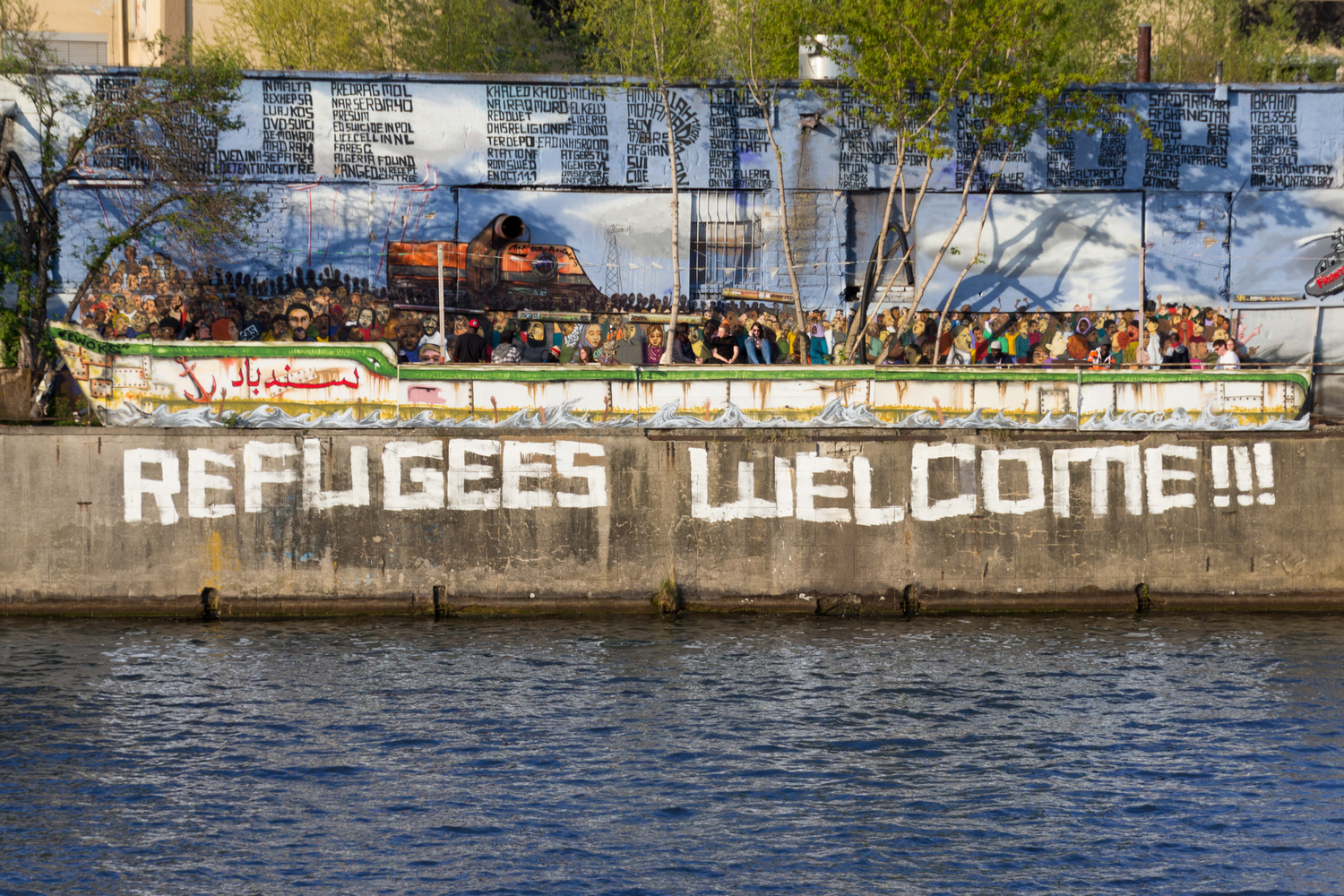 Recently, there has been a surge in forced migration globally due to various events. In 2022, over five million people fled from Ukraine within a short period of time, and in 2021, the deteriorating situation in Afghanistan prompted approximately one million people to leave the country. The integration of such large numbers of forced migrants into receiving societies can be difficult, as there is a risk of tension between the newcomers and the native population. This tension may erode trust within society and lead to a decrease in social contributions from the native population. It is unclear, however, whether such claims are supported by the evidence or the result of isolated anecdotes or people’s gut feeling.

In a new study, Emanuele Albarosa and Benjamin Elsner examine the impact of the large influx of refugees in Germany in 2015/2016 on people’s attitudes and perceptions towards society. During this period, more than one million people sought asylum in Germany, mainly from Syria, Afghanistan, and the Western Balkans. Over the course of the influx, the public opinion about these newcomers in Germany changed dramatically. Initially, society was highly welcoming and a new German term, “Welcome Culture,” was even coined. However, after a series of violent attacks on New Year’s Eve 2015/2016, where some of the perpetrators were recently arrived migrants, attitudes towards the refugees deteriorated. This shift in public opinion makes Germany an interesting case for analyzing the effect of a mass influx of migrants on people’s attitudes and perceptions towards society.

The authors of the study analyze various indicators of people’s perceptions and attitudes towards society from the SOEP, a large, representative panel survey of the German population. These indicators include: trust in others, fairness, concerns about crime, concerns about immigrants, and charitable donations. They also used data on the occurrence of anti-immigrant violence, which represents a strong form of anti-immigrant sentiment. In their analysis, they compared individuals who had similar attitudes before the influx of refugees, but some of whom lived in areas where the number of refugees increased significantly more than others.

Overall, they find little evidence that the influx affected people’s attitudes and perceptions. The red dots in Figure 1 indicate the estimated effect of a doubling of the local number of refugees relative to 2014 on the likelihood that a respondent strongly agrees to a statement such as “People can be trusted” or “One should exert caution towards foreigners.” An effect of 0.01 means that the likelihood increases by one percentage point. The effects on general perceptions of society as well as concerns about crime and immigration are small and statistically insignificant. The only effect that is significant is on donations. An increase in the number of refugees reduced the likelihood that a person donates to charity. 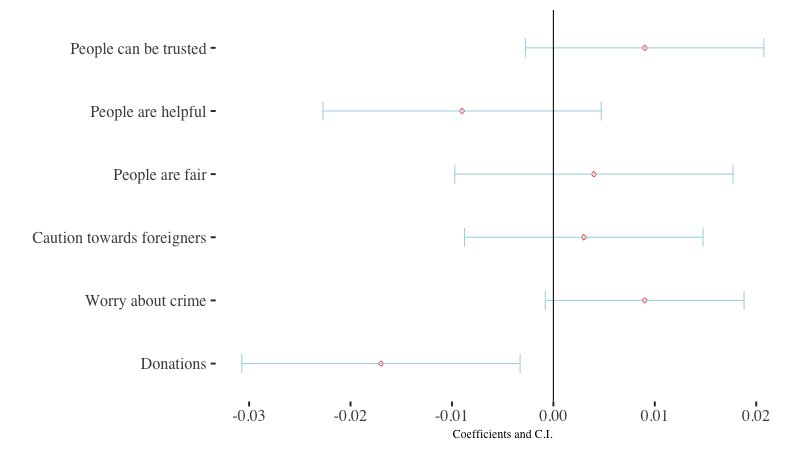 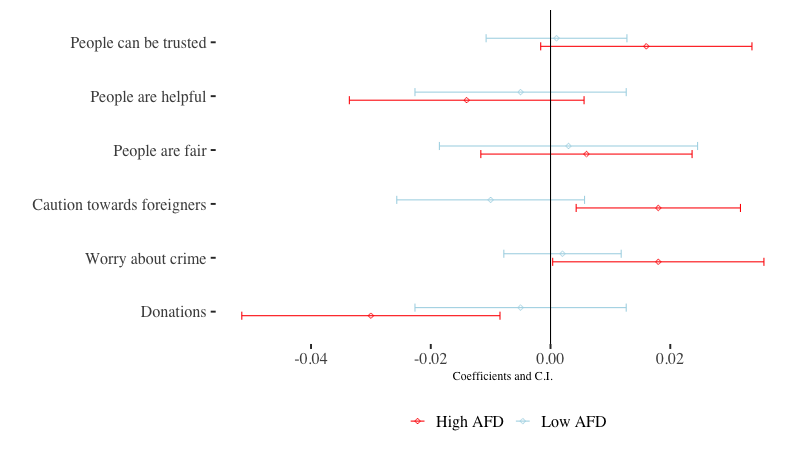 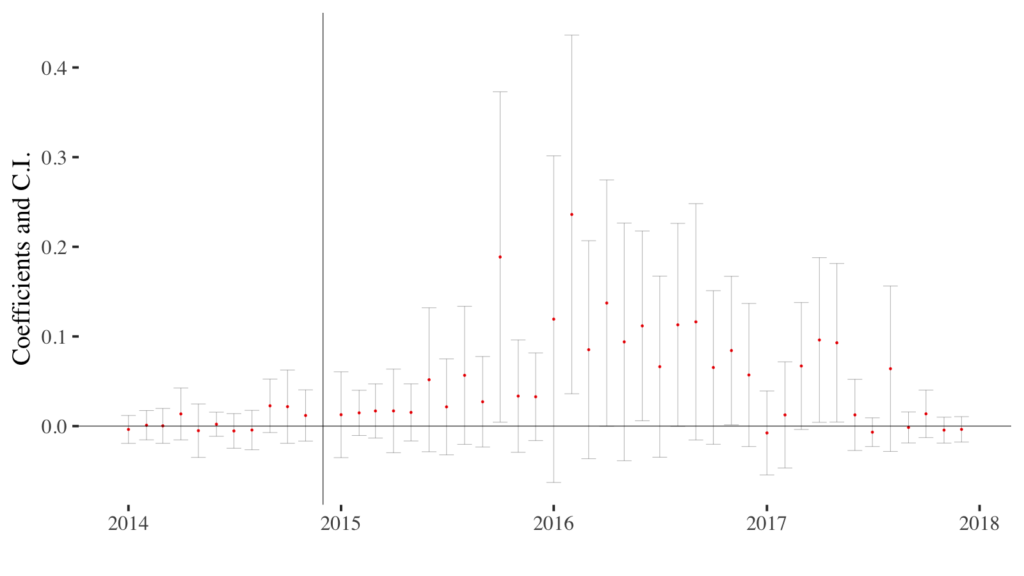 Overall, the study’s findings suggest that a sudden and significant influx of refugees did not significantly alter Germans’ perceptions of their society, despite the change in public opinion during the influx. However, the impact on anti-immigrant violence indicates that this influx was not without tension.