New volume on gender convergence in the labor market

For most countries in recent years women’s labor force participation has risen while men’s has fallen. At the same time, fertility rates declined, marriage rates decreased, and the average husband-wife age difference shrunk slowly but steadily. The number of single mothers rose, and women’s schooling levels surpassed men’s in some countries. 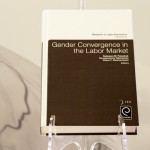 Along these trends, men’s and women’s wages and occupational structures have been converging. Research published in the new volume of Research in Labor Economics, edited by IZA Fellows Solomon Polachek and Konstantinos Tatsiramos together with IZA Director Klaus F. Zimmermann, investigates whether these trends are related, and whether we indeed observe gender convergence in the labor market.

One explanation given for the gender wage gap is the division of labor in the home. According to this argument, husbands specialize in market work whereas their wives specialize more in home activities, especially when they face family constraints such as the presence of children. As a result, husbands work a greater portion of their lives, invest more in human capital, and attain higher wages.

But why are husbands the breadwinners and women the homemakers?

One of the studies contained in the current Research in Labor Economics volume proposes a new explanation. The idea is that men have a comparative advantage in the market even at the very start of their marriage because they are typically older and more educated than their wives, and thus earn more even if there was no discrimination. Data from 200 countries indicate this is the case in all but San Marino. On average husbands are over two years older than their wives, but the age difference is as large as nine years, especially in less developed countries. The demand for children exacerbates these differences. Since women have limited years of fecundity, a high demand for children strengthens men’s demand for younger less educated wives. Over time, as fertility decreased, the husband-wife age gap narrowed, division of labor lessened, and the gender wage and occupational disparities diminished.

Although the wage gap between men and women has been narrowing, there still remains a substantial difference. One important question is whether government policies are effective in reducing the gap. One such policy is family leave legislation designed to subsidize parents to stay home with newborn or newly adopted children. One of the RLE articles shows that for high earners in Sweden there is a large difference between the wages earned by men and women (the so-called “glass ceiling”), which is present even before the first child is born. It increases after having children, even more so if parental leave taking is spread out. These findings suggest that the availability of very long parental leave in Sweden may be responsible for the glass ceiling because of lower levels of human capital investment among women and employers’ responses by placing relatively few women in fast-track career positions. Thus, while this policy makes holding a job easier and more family-friendly, it may not be as effective as some might think in eradicating the gender gap.

The issues explored by the other eight studies in this volume include patterns in lifetime work, gender complementarities, career progression, and the gender composition of top management.