On the origins of dishonesty: Do kids learn to cheat from their parents? 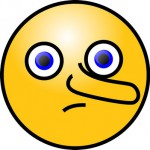 Dishonesty is a pervasive and costly phenomenon that may threaten mutual trust and social cohesion. But why is it that men tend to lie or cheat more often than women? IZA fellow John List and his co-authors Daniel Houser, Marco Piovesan, Anya Samek and Joachim Winter explore a possible explanation in a lab experiment (IZA DP No. 8906), which shows that parents are more likely to cheat in front of sons than in front of daughters.

(Note: This column was originally published on voxeu.org; edited and reposted with permission.)

Dishonesty is a widespread and multifaceted phenomenon – every day, the news brings reports of corporate dishonesty generating millions of dollars of costs to society. These public scandals, however, account only for a small part of dishonesty in society. Many ordinary people who consider themselves honest nevertheless sometimes cheat on taxes, steal from the workplace, illegally download music from the Internet, or use public transportation without paying the fare. The social cost of small-scale dishonesty is surprisingly large. As Dan Ariely summarizes in a recent article, the ‘tax gap’ – the difference between what the IRS estimates taxpayers should pay and what they actually pay – exceeds $300 billion annually; and employee theft and fraud is estimated at $600 billion a year in the US (Mazar et al. 2008).

In addition to direct pecuniary costs to businesses and governments, the prevalence of dishonesty can have a detrimental impact on the structure of economic exchange. As expressed by Nobel Laureate Kenneth Arrow more than three decades ago, “Virtually every commercial transaction has within itself an element of trust … It can be plausibly argued that much of the economic backwardness of the world can be explained by a lack of mutual confidence.”

Searching for the origins of dishonesty

But why might women be more sensitive to moral costs of dishonesty than men? In our recent paper “On the Origins of Dishonesty: From Parents to Children[RB1] ” (Houser et al. 2015), we studied whether facets of dishonest behavior can be traced back to how children learn from their parents. We wondered: Does the presence of a child inhibit a parent’s inclination to act dishonestly? That is, are parents modelling honest behavior to children? And, are parents more willing to cheat if the act benefits their child?

In our experiment, we considered both moral costs as well as scrutiny – being observed by others – as key factors influencing dishonesty. In particular, we were interested in whether the scrutiny of a son or daughter might change a parent’s willingness to cheat for profit gains. Here is what we did. Parents of 3- to 6-year-old children (mostly mothers, since mothers were much more likely to accompany their kids to our lab) tossed a coin and earned money depending on the outcome of the toss. We arranged things so that parents were able to increase their earnings by misreporting the outcome of the coin toss. In fact, because the coin toss was private, experimenters never knew whether any particular participant lied. In some cases, the child was in the room watching the parent’s decisions, and in some cases the parent was alone when making these decisions. We also varied whether the prize earned was cash for the parent or an equally valuable toy for the child.

The effect of scrutiny on honesty may arise both because a parent does not want to look like a dishonest person in front of their child and, relatedly, because parents want to transmit positive attitudes towards honesty to their children. For this reason, our empirical examination of the scrutiny effect potentially provides insights into the origins of dishonesty. We argue that parents transmit honest behavior because acting dishonestly imposes a moral cost, and this cost is strongest when the child is in the room. Moreover, our analysis enables us to discover empirically whether this scrutiny effect differs according to whether the child is a son or a daughter.

Whether parents’ willingness to behave dishonestly varies under the scrutiny of sons or daughters is a crucial question, as its answer might explain behavioral differences observed among adult men and women. As predicted by our model, we observe the highest level of cheating in the setting with low moral cost and no scrutiny – when the parent is alone and the prize is for the child (see Figure 1, third column). Overall, parents cheat little when their child is present. That is, the impulse to benefit one’s child through dishonest acts is extinguished by that same child’s scrutiny, perhaps due to the parent’s desire to model honesty. At the same time, when parents are alone, they cheat more when the prize is for their child than when it is for themselves. Thus, the impulse to benefit one’s child through dishonesty seems substantially greater than the impulse to benefit oneself in the same way. 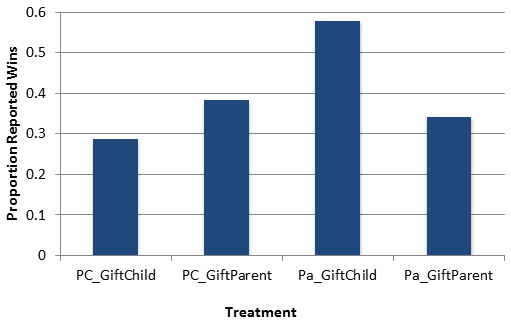 Importantly, we find that parents are more likely to act dishonestly in front of sons than in front of daughters (see Figure 2). This finding may shed light on the origins of the widely documented gender differences in cheating behavior among adults. Perhaps daughters, from very young ages, are more likely to witness honest decisions and ethical behavior. If so, the importance of honesty might be promoted to a greater degree in daughters than in sons. Lessons learned when young are not easily forgotten, and this may help to explain the relatively greater importance that women attach to moral norms and standards in general, and the higher rates of honesty among women in particular.

Figure 2. Rates of winning by gender of the child 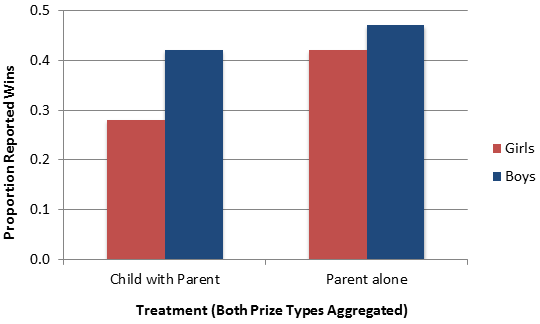 Bucciol, A, F Landini, and M Piovesan (2013), “Unethical Behavior in the Field: Demographic Characteristics and Beliefs of the Cheater”, Journal of Economic Behavior & Organization 93: 248–257.