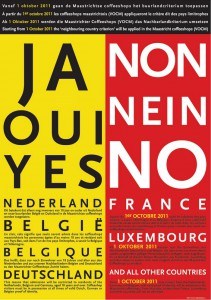 Should the recreational use of cannabis be legalized? In recent years, there has been a momentum towards more liberal drug policies across the world. In Europe many countries have decriminalized consumption. In Germany, Berlin is considering opening up the first legal cannabis shop of the country. Uruguay plans to be the first nation in the world to fully legalize all aspects of the cannabis trade. In the U.S. over 20 states now allow medical marijuana use, and recreational consumption has become legal in Alaska, Oregon, Washington and Colorado. With scarce empirical evidence on its societal impact, these policies are often implemented without much knowledge about their potential effects.

A recent IZA discussion paper by Olivier Marie and Ulf Zölitz provides new empirical evidence to the legalization debate by looking at the side effects of a very unusual policy experiment that took place in Maastricht, the Netherlands. In 2011, a temporary city-wide regulation was introduced which restricted legal cannabis access via licensed ‘coffeeshops’ depending on individual’s nationality. Only Dutch, German and Belgian passport holders maintained access while other nationals were prohibited from buying cannabis legally.

The figure highlights the results of this policy experiment. In the period of restricted access (indicated by the red lines), the grades of students who attended the local university and were no longer allowed to consume marijuana improved substantially relative to their Dutch, German Belgian counterparts. In particular the grades and pass rates of low-achievers, younger and female students increased after the cannabis prohibition.

The authors conclude that changes in the legal status of cannabis can lead to unintended negative side effects on educational outcomes and productivity via changes in consumption behavior. This is a new piece of evidence which should be considered in the complex cost-benefit analysis driving drug policy decision making.