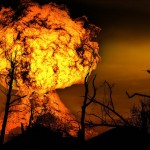 Economists seem to have a conspicuous interest in unexpected, far-reaching or even catastrophic events. In most cases, though, this interest does not reflect a tendency for cruel fascination and sensationalism, but stems from the academic desire to uncover meaningful causal effects of x on y.

To estimate causal relationships between two variables, in other words, whether one variable is dependent on the other, researchers have the need for what is known as exogenous variation: a change in a causing factor that can be precisely measured, that is out of the control of the subject affected by the change, and that cannot be anticipated. The discipline of economics has put increasing emphasis on the need for such exogenous variation in analyzing economic interactions to move from describing mere correlations to the provision of causal estimates. Most economists strongly believe that only the latter can offer meaningful advice for policy design.

Terror and conflict have serious adverse effects on children’s educational attainment. Next to the negative effects on the overall level of education, conflicts may have additional implications for the gender-based education gap. It is widely known that extremist Islamist groups in Afghanistan, Pakistan, and elsewhere have sought to remove females from public life. In IZA Discussion Paper No. 10168, Sarah Khan (University of Goettingen) and Andrew J. Seltzer (Royal Holloway, University of London & IZA) address such an impact of an unexpected terror campaign by the Pakistani Taliban in the north-western province of Khyber Pukhtoonkhwa which aimed at removing girls from school from the age of 10.

Using data from the Pakistan Social and Living Standards Measurement and the Global Terrorism Database, the researchers show that low levels of exposure to terrorism, which consisted of attacks on schools and threatening teachers and students, had a smaller effect on school enrollment than was thought. High levels of exposure reduced the enrollment rate for boys by about 5.5 percent and girls by about 10.5 percent. This impact on enrollment, although strongly significant, still indicates that a large portion of students continued to pursue schooling, making the decline far smaller than has commonly been portrayed in the media. Finally, although the Taliban pushed for students to enroll in religious schools (madrassas) rather than secular schools, the researchers found no evidence for and increased enrollment in such schools in the affected regions.

A different source of shock to education comes from natural disasters, such as storms, which create problems like impassable roads, limited transportation, or damage to school infrastructure that could limit student attendance. But does the reduced attendance automatically deteriorate student performance? And are all subjects equally affected?

IZA DP No. 10169 by Nekeisha Spencer (University of the West Indies), Solomon Polachek (Binghamton University & IZA), and Eric Strobl (Aix-Marseille University) sought to answer these questions by analyzing over 800 schools in thirteen Caribbean countries between 1993 and 2010.

The results show that less time spent in the classroom does not always affect learning outcomes. For the more technical and lab-oriented subjects – Biology, Chemistry and Physics — the results show a negative and statistically significant relationship between hurricanes and test scores. For subjects in the humanities – French, Spanish and Geography — hurricanes had no impact on standardized exam performance. This does not imply that students can pass humanities exams without attending school but that students can perform satisfactorily in these subjects even with a reduction in school days.

Besides sudden and drastic events like terror campaigns and hurricanes, a third type of exogenous shock can be induced by economic fluctuations. Economic crises display the requirements for exogenous shocks: they are not anticipated, are usually out of individual control and arguably affect individual economic decisions.

Experiences with previous economic downturns have shown that during periods of poor economic conditions, the demand for education increases. While this counter-cyclical phenomenon is well-documented, less is known about the types of individuals who are impacted by weaker labor market prospects.

IZA DP No. 10167 by Ernest Boffy-Ramirez (University of Colorado Denver & IZA) examines how higher unemployment rates before high school graduation impact subsequent educational attainment measured 30 years later. Using data from the 1979 US National Longitudinal Survey of Youth, Boffy-Ramirez identifies individuals who are on the boundary between pursuing and not pursuing additional education. For these individuals, exposure to a higher unemployment rate at age 17 is strongly associated with higher educational attainment, pushing individuals into continuing their studies to elude bad labor market conditions.