What happens to student applications when university tuition fees go up? 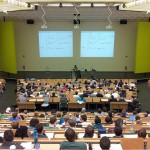 The coalition government’s increase of university tuition fees in England in 2012 has led to lively debates on how the cost of higher education affects university applications, particularly for students from disadvantaged backgrounds. Labour has brought this issue back to the centre of their election campaign, by pledging that if it is elected, tuition fees would be cut from a maximum of £9,000 a year to £6,000 a year.

By looking at the variation in university tuition fees in England and Scotland, my research has attempted to measure the effect of fees on applications and attendance.

The situation is very different on each side of the border because of two reforms. In 2001, the Scottish government removed upfront tuition fees, replacing fees of £1,000 a year with an endowment scheme that required students to pay a total of £2,000 after graduation. This endowment scheme was itself eliminated in 2007, meaning that Scottish students do not pay any fees to attend university in Scotland. In England, the coalition increased fees from a maximum of £3,375 a year to £9,000 in 2012.

Applications to institutions and subjects that lead to higher salaries and higher employment rates after graduation – such as medicine, dentistry and engineering – are much less affected by changes in fees. These results are consistent for the 2001 Scottish reform and the English reform in 2012 and suggest that students respond to higher fees by choosing courses that offer better employment prospects after graduation.

No drop off for disadvantaged students

To examine whether the increase in fees in 2012 had a disproportionate effect on students from less advantaged backgrounds, I looked at data from the Higher Education Statistics Agency (HESA) on the number of first-year undergraduates by ethnic group and by local authority for the period 2008-2013.

Although students from ethnic minorities are less likely to go to college, they were actually less affected by the increase in fees in 2012: the number of first-year black undergraduates fell by about 5%, between 2008 and 2013, compared with 28% for white students.

There is also no evidence that attendance has decreased more among students from local authorities with lower rates of participation in higher education. This suggests that fair access schemes and the provision of student loans are improving access for students from disadvantaged backgrounds.

Impact of any future cuts

The results of this study suggest that the Labour party’s proposal to reduce the cap on tuition fees in England from £9,000 to £6,000 could increase applications by between 5% and 9%. However, a reduction in fees would mean that a larger share of university funding would need to come from general taxation.

The Labour party has said the estimated £2.7 billion gap would be plugged by raising extra taxation by restricting pension tax relief on those with the highest incomes. Other parties have questioned how to ensure any money raised in taxation is passed onto universities.

If most of the benefit of a university degree is social – because society as a whole benefits from having well-qualified doctors, nurses and teachers – it makes sense to charge lower fees and fund universities out of general taxation. But if students are the ones who benefit the most from having a degree, it would make sense to charge higher fees, particularly for courses that lead to better paid jobs after graduation.

This article was originally published on The Conversation.
Read the original article.