“Some market interventions are efficient” 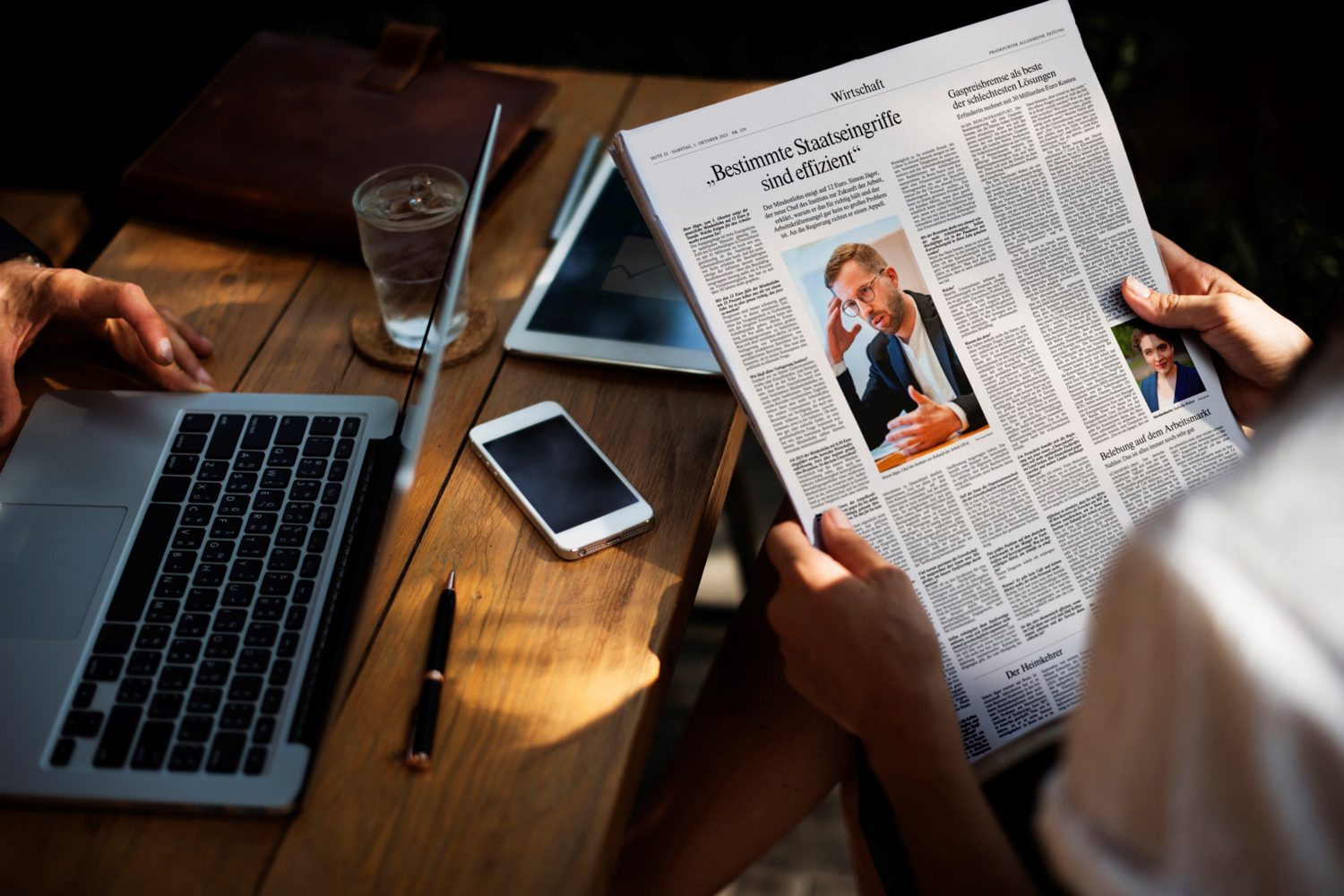 On October 1, 2022, Germany raised the nationwide minimum wage to 12 euros. In an interview with Frankfurter Allgemeine Zeitung, IZA’s new CEO Simon Jäger explains why he thinks that was the right thing to do – and why the shortage of workers may not be such a big problem after all. Below is an English translation of the  German interview.

Mr. Jäger, as of October 1st, the statutory minimum wage will increase to 12 euros per hour. What consequences do you expect for the labor market?

Despite the energy crisis, the circumstances are favorable in several respects: With 45 million people in work, employment in Germany is higher than ever, and at the same time labor demand is very strong. On the other hand, employees are currently experiencing massive losses in real wages due to inflation – across all groups of workers the loss is more than 4 percent compared to the previous year. This is something that hasn’t happened in the past 50 years.

At 12 euros, the minimum wage is 25 percent higher than a year ago. Is it the right thing to do now?

Predictions are always difficult, especially in these uncertain times. But past experience and recent research can give us clues. My expectation is that, on balance, we don’t need to fear major job losses. But we are likely to see a reallocation of jobs from less productive to more productive firms. How to judge this trend is ultimately a political question.

How exactly does this reallocation occur?

Let’s take small restaurants or corner shops, for example. Their business model might no longer work above a certain minimum wage level. Such firms would then disappear. At the same time, however, more workers are available for other firms in other sectors, such as manufacturing, that can afford to pay higher wages. Whether that’s good or bad is for society to decide. The question is, to what extent should firms still exist if they cannot pay a minimum wage?

When the minimum wage of 8.50 euros was introduced in 2015, Germany was in the midst of an economic upswing. Now we are at the brink of recession. Doesn’t this make a difference?

More recent minimum wage research actually suggests that a moderate minimum wage won’t have major employment effects, even in times of higher unemployment. Besides, unemployment in Germany is still rather low by historical and international standards.

Passing a law to raise the minimum wage must be seen as an insult to the minimum wage commission, which had previously been considered free and independent. You don’t think that’s a problem?

That’s a political rather than an economic question. Essentially, setting minimum wages is always political, regardless of whether or not you have a commission with representatives of employers and unions. But legislative intervention seems justified also in light of the fact that Germany still has one of the largest low-wage sectors in Europe. The problem is not just that many people have low labor incomes. On a macroeconomic level, the negative externalities are huge.

What do you mean by “negative externalities” of the low-wage sector?

A prime example of negative externalities is the 49-euro flight ticket to Mallorca, but the same goes for the purchase of cheap Russian gas over many years: The prices do not correspond to the true costs, here in terms of climate and security policy, and that distorts both our way of life and our economic structure in a harmful way.

What does the low-wage sector have to do with it?

If it is too easy for firms to succeed with business models based on low wages, then too many resources are allocated to less productive sectors – while at the same time there is a shortage of workers in productive sectors. A higher minimum wage can help avoid such misallocation. We also know from research that people with good jobs are more committed to society and less susceptible to political extremes. The dogma used to be that the labor market is efficient when left alone. Today it can be said that certain government interventions are also efficient.

Is it efficient for the state to set wages because then unions and employers no longer have to engage in agonizingly long collective bargaining?

It’s not a matter of either/or and conflicting goals. Collective bargaining coverage has decreased significantly in Germany over the past few decades. And most importantly, the labor market has become increasingly segregated: On the one hand, there are highly productive firms that are bound by collective agreements and pay good wages. But while cleaning staff and porters used to be employed directly by those firms, their work is now being outsourced to cleaning and security services, with less favorable collective agreements, working conditions and profit-sharing opportunities. A higher minimum wage reduces the incentive to outsource these activities.

But these service industries are exactly where unions have a hard time recruiting new members in order to push through better collective agreements. Why is that?

The structures for a functioning collective bargaining policy are often lacking. Where employers do not form employers’ associations, trade unions find it difficult to negotiate with them on sectoral collective agreements. And the rise of precarious work, for example through short-term contracts, makes it more difficult for people to commit to a common cause.

Should employers offer collective agreements if employees do not even organize themselves into unions?

Of course, both belong together. And I don’t want to assign any blame. I only note that there is a change in the institutional framework that has contributed to the decline in collective bargaining coverage. This applies, for example, to the instrument of declaring collective agreements to be binding for the entire sector.

Should the state compensate for the organizational weaknesses of the trade unions?

This is primarily a political question. Let me just say that up until the 1990s, for example, it was common practice to declare collective agreements in the very large retail sector to be generally binding. After conflicts among employers, this system broke down. That’s one of the causes of reduced collective bargaining coverage.

The biggest problem of the German labor market is the lack of skilled workers and service personnel. How can this be remedied?

I beg to disagree with that diagnosis.

Why? There is hardly any café or bakery that’s not looking for staff.

Right. But don’t forget that we currently have more employees than ever before. So the workforce hasn’t disappeared, it’s just somewhere else. Workers have left places where working conditions are poor or wages are low.

So it’s economically efficient if the wait staff at the café is reduced from five to two and the service is poor?

Possibly, yes. This creates pressure to increase wages, to automate certain activities and to align working conditions with the needs of employees. In Bonn, for example, a hairdresser has been flooded with job applications after offering a four-day workweek, even though many hairdressers are desperately looking for staff. This may lead to an upward pressure on consumer prices, but it doesn’t have to be bad for society if we previously had conditions that could only exist with a huge low-wage sector and all the associated externalities.

With the recession, unemployment is likely to rise again. Should employees be kept in their jobs with short-time work benefits like in the pandemic?

When the house is on fire, you grab the fire hose. In the current situation, I consider the short-time allowance to be a very important tool for securing jobs. But we shouldn’t overlook the considerable costs.

Some companies take advantage of the short-time allowance even though they don’t need it at all. It also tends to inhibit structural change. Positive and negative forces have to be cleverly balanced. Unfortunately, that’s not so easy in Germany: We are flying blind when it comes to economic and labor market policy.

And why is that?

We simply don’t have the necessary data to analyze these important questions. In Switzerland or Italy, for example, data from official labor market statistics can be linked with firm-level data. And it turns out that in areas with a lot of short-time work, less productive firms survive, while more productive firms experience slower growth. This is hardly surprising if you consider that the software developer whose job at a medium-sized automotive supplier is saved with short-time work benefits is not available to any start-up. My policy advice: As the largest industrialized country in Europe, we must end this blind flight. We have a lot of data in different silos. But the federal government must create the legal basis so that they can finally be brought together. This is the prerequisite for excellent research and thus also for evidence-based policymaking.

The government is trying to make progress with a new “opportunity card” to attract more foreign skilled workers to the country. Does Germany even stand a chance in competing with the U.S. and other countries?

I think so. Many people want to live where there is strong social cohesion and where the rule of law is still largely intact. This is where Germany has a locational advantage. And Germany is also attractive when it comes to science, research and innovation.

Apparently attractive enough for you to interrupt your scholarly career at MIT in your mid-30s to head the IZA Institute of Labor Economics in Bonn.

This is an exciting and important task. Almost all major social debates of our time are also reflected in the labor market. Thanks to new research methods, we can now provide much better answers than 20 or 30 years ago and thus provide valuable input into social and political debates. With this in mind, I am very excited to lead an institute which does excellent research and has an outstanding international network. We want to build bridges between scientific research and policymaking. That’s why we will also set up a branch in Berlin.

With Ulrike Malmendier, another top researcher is coming back from America, at least as a member of the German Council of Economic Advisors. Is it a new trend that excellent young researchers also want to have more influence on practice?

I think there is a lot of interest because the challenges of our time are gigantic. Many truths about the stability of liberal democracies are being shaken. In my generation, I see a strong motivation to not just do basic research, “l’art pour l’art”, but also contribute directly to tackling social challenges with relevant research.