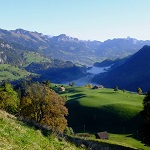 As the German sociologist Max Weber said back in 1904, the rise of capitalism is closely linked to the emergence of Protestantism. Individualism and the Protestant work ethic fits well with the principles of the market economy. In a new IZA discussion paper, Luca Nunziata and Lorenzo Rocco provide evidence for this century-old hypothesis. Using Swiss census data they show that Protestants are more likely to be entrepreneurs than Catholics.

The researchers focus on religious minorities in Switzerland: minorities tend to adhere more strongly to the rules and traditions of their religion because religion is an important component of their identity that is worth defending against the influence of the majority. The economists exploit the fact that Protestants represent the minority in Lucerne, Uri, Schwyz and Zug, whereas only in the canton of Berne there is a Protestant majority coupled with a Catholic minority.

The analysis of Swiss Census data from 1970 to 2000 shows that religious ethics significantly affect economic behavior and outcomes: on average Protestants are 2.9 percent more likely to be entrepreneurs than Catholics. This effect is driven by high-skilled and prime-aged entrepreneurs but not by gender differences. Moreover, the effect is weaker among German-speakers and especially high in the Swiss Plateau.