In the gym and on the job: creatine makes successful 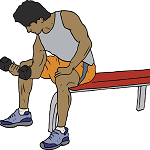 It is widely used among tennis players, ski jumpers and bodybuilders as a dietary supplement: Creatine, an organic acid that supplies muscles and the brain with energy very effectively. But maybe it does not only enhance the performance in the gym or on the tennis court, but also on the labor market.

This is what a new IZA discussion paper by Petri Böckermann, Alex Bryson, Jutta Viinikainen, Christian Hakulinen, Laura Pulkki-Raback and Olli Raitakari suggests. They investigated the influence of the quantity of creatinine in the urine of over 3500 Finnish children on their success on the labor market later in life. The measurements were conducted in 1980, when the performance-improving effect of creatine was not yet known.

The researchers show that a higher level of creatinine is correlated with a higher income and more working years. Ten percent more creatinine in the urine of the Finnish boys and girls made them earn 1.5 percent more on average as grown-ups. This amounts to roughly 240 extra euros per year. However, since educational outcomes remain unaffected, creatine obviously influences labor market performance through other channels.

According to the authors, the positive effect may be related to particular personality traits. People with high levels of creatine often fulfill their tasks with more perseverance and commitment. They are also said to be more conscientious and extrovert, which might improve their performance on the job.

Since the researchers only looked at endogenous creatine levels, it remains an open question whether taking creatine supplements would also improve one’s career prospects.