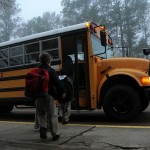 School tracking systems, which allot students to certain school types according to their ability, seek to improve efficiency in education by tailoring curricula to students’ needs. Yet, early tracking bears the risk of misallocating students, as information about their full academic potential may be incomplete at the time of tracking. This risk of misallocation is likely to be higher the younger the age at which children are tracked.

Germany’s school system tracks students at the particularly young age of 10, and has therefore often been criticized for perpetuating disadvantage. However, so far there is no conclusive evidence that pupils who are at the threshold between two tracks (and therefore very similar in terms of their academic potential) experience different career outcomes when they are tracked in a higher versus a lower track. Whether, and to what extent such differences are to be expected depends on a very important, but nevertheless often overlooked feature of tracking systems: the possibility to revise initial tracking decisions at a later stage.

In a recent IZA Discussion Paper, Christian Dustmann, Patrick A. Puhani and Uta Schönberg investigate the effects of being tracked into a higher vs. a lower track at age 10 on long-term labor market and educational outcomes. Comparing students of similar ability around the threshold between a higher and a lower track, they find no difference in terms of completed education or long-term labor market outcomes.

This surprising finding is even more remarkable as these children have been exposed to very different learning environments for about 5 years. The authors show that this is due to the built-in flexibilities in the German tracking system, allowing children to up- or downgrade after grade 9/10 and explaining why there are no long-term effects of initial track misallocation for students at the margin between two tracks.

According to the authors, two important conclusions emerge from this research. First, when evaluating tracking systems, it is important to consider not only the potential misallocation of pupils across tracks, but also the flexibilities in the system that allow students to remedy initial track choices at a later stage when more information about their academic abilities is available. These flexibilities are an important, though often overlooked, feature of the German education system. Second, the research shows more generally that substantial disadvantages in terms of teaching curriculum and peer exposure do not need to have long-term consequences, as long as the education system allows revising initial choices at later stages. This second implication is not only relevant for tracking systems, but for education systems more generally.