Demographic aging and accompanying shrinking labor forces are common phenomena throughout the developed world. There is a widespread notion that societal aging will put significant pressure on public budgets, a view supported by recent OECD projections. Expenditures for public health are expected to rise, old-age pension systems already are burdened by an imbalance of working and retired population shares. This may threaten governments’ capacities to fund social welfare systems and the provision of other vital public goods, like education or infrastructure.

Such pessimistic outlooks often neglect possible developments on the revenue side of governments’ budgets, and ignore important interrelations between demographic transitions and labor market outcomes. If, for example, a shrinking labor force is becoming better educated at the same time, average wages might increase. Additionally, if there is a scarcity of labor, standard economic theory predicts that wages should increase in order to stimulate labor supply. Future tax revenues may therefore increase despite population shrinkage.

To overcome these limitations to provide a more appropriate outlook, IZA CEO Hilmar Schneider, IZA Fellows Mathias Dolls (ZEW, IZA), Karina Doorley (CEPS, IZA), Alari Paulus (U Essex), Sebastian Siegloch (U Mannheim, IZA), and Eric Sommer (IZA) study fiscal sustainability in the EU by combining population projections for 2030 with micro-based elasticities of labor supply and demand. They consider two demographic projection scenarios, one pessimistic and one optimistic, which differ in the degree of immigration that counteracts against an aging population.

As a key contribution of this study, the authors explicitly model implied wage effects of these demographic projections under consideration of supply and demand elasticities. Supply elasticities (the degree to which an individual adjusts his or her labor supply to changing wage rates) are obtained from Bargain et al (2014) and are differentiated by skill, gender and household type for each EU country. On the demand side, they differentiate own-wage elasticities of demand (firms’ labor demand responses to wage rate changes) by country and skill group, drawing on the meta-analysis by Lichter et al (2015).

Using this setup, the authors are able to estimate the fiscal consequences of the demographic pressure on the balance between sources of public revenue (i.e. personal taxes, social insurance contributions, social transfers, and public pensions) and demography-related expenditures (i.e. health, old-age care, child care, and educational expenditures) and to analyze the impact of an increase in the statutory retirement age, an obvious and widely discussed policy response to demographic change.

The results of the study are striking. Irrespective the pessimistic or optimistic scenario, there are two mega-trends for the future European labor force. While becoming older, EU labor forces are projected to become better educated at the same time (Figure 1), with the consequence of rising average wages throughout Europe.

These changes in size and education of the work force have important fiscal consequences. Figure 2 depicts changes in the fiscal balance from 2010 to 2030 decomposed into effects on direct taxes (TAX), social insurance contributions by employers, employees and self-employed (SIC), social transfers and pensions (BEN), as well as other age-related public expenditures for education, child care and health (EXP) [1]. 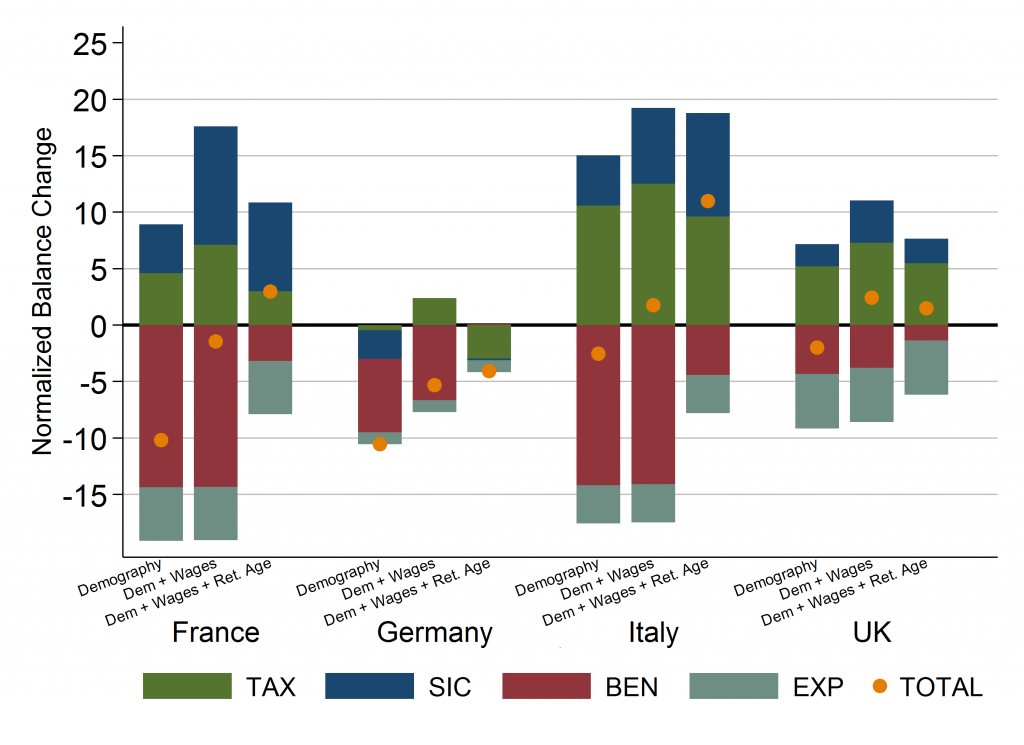 Descriptive results differ greatly by whether wage reactions to demographic pressure are taken into account. Pure demographic effects, ignoring labor market effects (left bar in each country), predict expenditures to grow, and draw fiscal balances below zero (the orange dots represent overall balances). This outcome is however unrealistic, as it does not account for labor market changes as a consequence of changing scarcities on the labor market, i.e. raising wages and tax revenues. If wage reactions are taken into account (middle bar), higher revenues from taxes and contributions drive total balances towards or even above zero, while benefit payments remain rather unchanged. This suggests that ignoring labor market feedbacks with demographic change may lead to fiscal conclusions that are too pessimistic.

Finally, assuming an increase in the statutory retirement age as a likely policy response (in this case uniformly by 5 years between 2010 and 2030), this reform would further improve fiscal balances in the majority of countries, due to lower benefit payments and higher income tax revenues. There is however an attenuating effect, as the UK example demonstrates. While a higher retirement age increases the number of people in work, this may have detrimental effects on average wages, manifesting in lower total revenues. This simple experiment of a substantial increase in the statutory retirement age however shows that, taking labor market effects into account, this may bring fiscal balances close to zero in most EU countries.

In the case of Germany the fiscal balance stays below zero, even after labor market effects and a higher retirement age have been taken into account. This is largely due to the fact that overall population and labor force recede stronger in Germany than in most other European countries. In addition the authors assume only a weak German educational expansion, which leads to weaker positive fiscal effects. But as Figure 2 shows, even the German fiscal balance is much less pessimistic once labor market effects and a higher retirement age are considered.

“Overall, the results paint a less worrying outlook on the fiscal implications of the demographic change. Wage dynamics are highly relevant for the analysis as dramatic demographic shifts may engender important wage adjustments. This highlights the importance of taking interactions between the demand and supply sides of the labor market into account when evaluating retirement reforms – it can be highly misleading to look at static effects only,” says IZA’s CEO Hilmar Schneider.