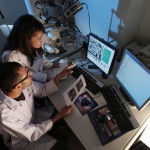 Thinking about a new research paper? You may want to start searching for co-authors of different ethnicity. Statistically, this will increase the chances to get your paper accepted in a top journal. That’s what a new IZA Discussion Paper (written by an ethnically diverse author duo) suggests.

Using data from the Thomson-Reuters Web of Science, the study by Harvard economists Richard B. Freeman and Wei Huang examines the ethnic identity of authors in over 2.5 million papers written by U.S.-based authors from 1985 to 2008. In this period the frequency of English and European names among authors fell relative to the frequency of names from China and other developing countries. In 1985, 57 percent of authors had “English” names. This share dropped below 50 percent in 2008. Over the same period, the proportion of Chinese named authors tripled from 4.8 to 14 percent.

To determine whether a name is English, Korean or Russian, the authors used a name-ethnicity matching program, which combines information on the distribution of names by ethnicity (e.g. Kim is typically Korean, while Zhang is most likely Chinese) and the metropolitan areas in which particular ethnicities are disproportionately represented.

The analysis shows that persons of similar ethnicity co-author together more frequently than predicted by their proportion among authors. Freeman and Huang compare the distribution of observed co-authorships with the distribution that would arise if authors were matched randomly. For example, one would expect 1.522 percent of all two-author papers to be written by two Chinese researchers, but their actual share is 4.157 percent.

Greater diversity thus seems to contribute to the quality of the scientific papers that a research team produces. This may be because diversity raises productivity by widening ideas. Papers from more diverse collaborations should then contain a wider range of scientific terms, use more varied equipment, procedures, or data and reference a wider range of previous work than papers from more homogeneous groups. Another potential explanation is that having co-authors of different ethnicity increases citations through network effects rather than through novel ideas.

IZA Discussion Paper No. 8432 Collaborating With People Like Me: Ethnic Co-authorship within the US Richard B. Freeman, Wei Huang