Grades and rank: How do they affect student effort? 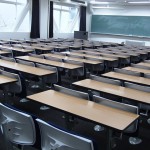 The educational system is built upon a sequence of tests to measure student performance. Improving student performance is a key educational and economic policy issue to which much time and resources are devoted. At the same time, the results of these tests often lay the foundation for the distribution of school resources and spur considerable public debates. A question that has not received as much consideration is how test incentives inherent in our conventional grading system affect student motivation and effort? What if we leave the beaten path of grading students on scale from 1 to 6 or A to F and introduce alternative ideas of incentivizing students?

In a new IZA Discussion paper Nina Jalava, Juanna Schrøter Joensen and Elin Pellas conduct a randomized field experiment on more than a thousand sixth graders in Swedish primary schools to shed light on the effects of alternative incentive systems in the classroom. They find that ranking students by distinguishing the top three performers in the class has particularly large motivational power for highly-skilled boys and girls. While the boys seem to compete independent of the peer group, highly skilled girls seem less motivated if they are tested in a class where they do not know their classmates well. In addition, these girls also increase their effort if offered a certificate for high performance – an incentive boys do not react to. However, looking at the low skilled students, these incentive measures may backfire and exert negative effects on effort.

Based on these results, the author call for caution in using financial incentive schemes for schools and teachers – such as school accountability or teacher performance pay systems — based on the outcomes of students’ test scores. The study implies that the distribution of financial resources will be highly dependent on how the students prepare for the tests, whether students know their peers during the tests and how teachers set incentives in terms of grading. It could therefore be easy for teachers and principals to manipulate such measures by simply giving a symbolic reward or singling out the top performers on the day of the test, which would in turn mask and bias true student ability.