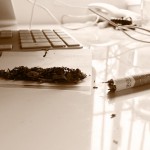 When a U.S. state passes a medical marijuana law (MML), effectively lowering the costs of obtaining marijuana for both patients and non-patients, part-time college students in the state spend significantly less time attending and studying for class. Moreover, this reduction in educationally productive time is approximately offset by an increase in time spent watching television.

These results, reported in an IZA discussion paper by researchers Yu-Wei Luke Chu (Victoria University of Wellington) and Seth Gershenson (American University & IZA), enhance our understanding of how marijuana usage affects the accumulation of human capital in two main ways. First, it suggests that there is a negative, causal relationship between marijuana use and educational outcomes, since increased marijuana use is the main mechanism through which MMLs are likely to affect students’ time use.

Second, these results provide evidence on the mechanisms through which access to marijuana might affect college students’ educational achievement and attainment. These results are broadly consistent with those of a previous IZA paper, which demonstrates that increased access to marijuana decreased the academic performance of students at Maastricht University, particularly among relatively low-performing students.

More generally, these results contribute to a growing literature on the impacts of MMLs on individuals’ behaviors and health outcomes, some of which are arguably unintended consequences of the laws. For example, past research documents positive effects of MMLs on illicit marijuana use and negative effects on the suicide rates of young men, alcohol-related traffic fatalities, and the prevalence of obesity.

Like in past studies, the authors identify the effect of MMLs on time use using a difference-in-differences strategy that compares student time use between MML and non-MML states, after controlling for pre-existing (i.e., pre-MML implementation) differences between the two types of states. Individuals’ daily time use is measured using data from 24-hour retrospective time diaries collected by the American Time Use Survey (ATUS), which is a nationally representative survey that has been administered annually since 2003 by the Bureau of Labor Statistics. Retrospective time diaries are the ideal instruments with which to measure time spent in school-related activities, as they likely yield more accurate measures of students’ non-school time use and are less prone to over-reporting of socially desirable activities than are other types of survey instruments.

MMLs did not affect secondary (high school) students’ time use, which is consistent with extant evidence that MMLs did not affect teenagers’ marijuana use, nor did MMLs affect full-time college students. Because full-time college-goers tend to be stronger academically than part-time college-goers, the latter null result is also consistent with evidence that access to marijuana disproportionately harms the achievement of relatively low-performing students. Another interesting source of heterogeneity is demographic background: the impact of MMLs on part-time students’ time use is slightly larger in magnitude among black students and male students, two demographic groups who attend and complete college at lower rates than their white and female counterparts.

These results remind of the potential for unintended consequences of public policy, which should be accounted for in both the design and evaluation of MMLs.