A growing literature in economics has demonstrated that grammatical features of languages influence our economic decisions. For example, whether or not a language makes a clear-cut distinction between present and future (while an English speaker uses a future marker as in “it will rain tomorrow,” a German speaker can simply rely on present tense as in “it rains tomorrow”) may affect intertemporal choices with regard to savings or retirement.

But why do languages differ in grammatical features such as tense, gender or politeness distinctions in the first place? New research by Oded Galor (Brown University and IZA), Omer Ozak (Southern Methodist University), and Assaf Sarid (University of Haifa) published in a recent IZA Discussion Paper argues that these differences can to a significant degree be explained by differences in historical economic and geographic circumstances – crop return, variation in agricultural productivity across genders, and ecological diversity – several hundred years in the past.

Crop return predicts the existence of a future tense

Languages differ in the structure of when and how they mark future events by whether speakers have to adjust a verb when talking about the future. For example, French speakers are required to change the form of the verb when changing a statement from the present (“Il fait froid aujour d’hui” (It is cold today)) to the future (“Il fera froid demain.” (It will be cold tomorrow)). Languages like this, which grammatically distinguish between present and future, have what is known as an inflectional future tense. By comparison, in Finnish, the present tense is used in reference to both the present (“Tänään on kylmää” (Today is cold)) and the future (“Huomenna on kylmää” (Tomorrow is cold)). 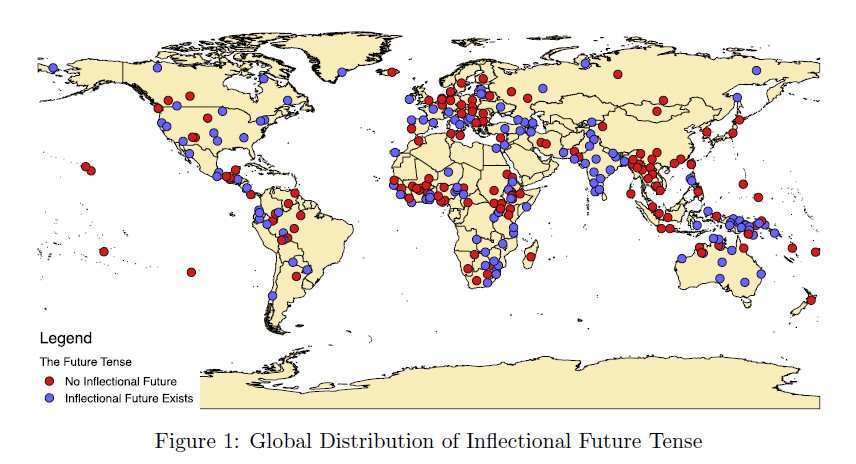 In an economic sense, possessing an inflectional future tense is believed to indicate an on average lower long-term orientation. The researchers argue that a long-term orientation is a cultural trait that should be inversely correlated to crop returns. In regions with high historical crop returns, people were able to rely on contemporary food production and thus would have had to care less about the future.

Results relating pre-1500CE potential crop returns to the existence of a distinct future tense confirm this hypothesis: The higher the historical crop return in a geographical area, the less likely languages in this area developed a future tense.

But do language structures indeed transmit pre-industrial crop returns into economic behavior today? Results focusing on second-generation immigrants in the US suggest there is such a long-term effect. Immigrants speaking a mother tongue with inflectional future tense display lower probabilities of attending college by 4 percentage points, indicating indeed a lower long-term orientation. Thus, the study by Galor and his colleagues sheds light on very long-run interlinkages between pre-industrial variation in geographical features, language structures and (current) economic outcomes.