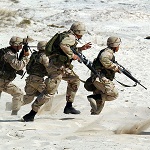 In most countries of the world it is still a duty of young men to serve for the army for a couple of months or even years. For many of the recruits this not only means leaving home, but also an interruption of their educational or professional career.

In a new IZA Discussion Paper Paul Bingley, Petter Lundborg and Stéphanie Vincent Lyk-Jensen show that especially young men with high cognitive abilities get hit hard by this break. Using data of the Danish Military, they discover that future earnings of this group are diminished by 7 percent. This effect is nearly of the size of one additional year of schooling. There is no such wage-penalty for low-skilled conscripts.

In Denmark, all men turning 18 have to complete several examinations and an IQ Test. All males declared fit for military service participate in a lottery, in which about 40 percent are randomly chosen and have to serve in the army or navy for eight months. This special way of assignment helps the researchers to compare recruits between 25 and 35 who are very similar but only differ in being selected via the lottery or not.

According to the researchers, the earnings loss of the high-skilled is best explained by the forced break in their educational career. The duty of military service is a disruption in a period of life, when important decisions on investments in human capital are being taken. Many men have to postpone going to the university when they are picked by the military: A Dane who had to serve is 2,3 percent more likely to be still enrolled at university at age 30, which implies a delayed labor market entrance and reduced wages.