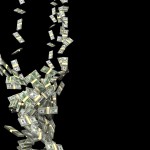 Voting is the foundation of modern democracy. The causes of people’s political attitudes, however, are largely unknown. Are people’s party preferences motivated by deeply ethical views, or are voting choices made out of pure self-interest? Testing between these two alternative theories is very difficult.

A new IZA Discussion Paper by Nattavudh Powdthavee and Andrew J. Oswald provides new evidence on the formation of political preferences by analyzing lottery winners. The authors compare people before and after a lottery windfall and show that winners tend to switch towards support for a right-wing political party and to become less egalitarian. The larger the win, the more people tilt to the right. The relationship is strongest for males. The findings are consistent with the view that voting is driven partly by human self-interest since right-wing parties tend to redistribute less money from the rich to the poor. Hence, the results of the paper show that money makes people more right-wing.