Transitioning across gender is related to greater life and job satisfaction 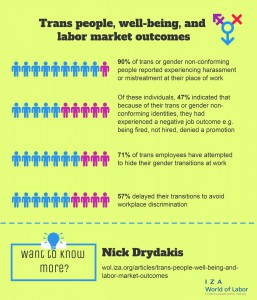 A new IZA World of Labor report finds that after transitioning, trans people experience better mental health, and greater life and job satisfaction. Furthermore, studies show that while becoming a man is related to a small rise in wages, trans-women experience a significant fall in earnings.

Trans people have a gender identity that differs from their assigned sex. In the EU and the US there is a growing population of trans people who start their transition in order to align their inner gender identities with their outward appearance.

IZA fellow Nick Drydakis of Anglia Ruskin University summarizes a number of recent studies on trans identity. Due to transphobia, trans people are exposed to extremely high levels of bias.

Fear of discrimination and violence

Between 2008 and 2016 the number of murders of trans people globally increased by 96%. Furthermore, in the US, it has been found that trans people face twice the unemployment rate of the general population. A study from the National Center for Transgender Equality reports that 90% of trans or gender non-conforming people reported experiencing harassment or mistreatment at their place of work. In addition, the study states that 71% of trans employees attempted to hide their gender transitions and 57% delayed their transitions to avoid workplace discrimination.

However, trans employees, after having reached the point of passing to their inner gender identity, do not generally experience the bullying and harassment to which they were subjected before transitioning. They experience less depression as well as less psychological distress. Further benefits trans people associate with being trans and accepting their gender identity are: personal growth and resiliency, improvements in their relationships with others, and being inspired to engage in social justice causes.

More than half of the EU member states require by law that trans people undergo sex reassignment surgery which entails sterilization before their gender identity is officially recognized. Trans individuals continue to experience severe exclusions when they are unable to obtain identity documents that reflect their gender identity. Many trans people are either not keen on surgery or don’t have the financial means to pay for it.

Drydakis says: “Having to choose between sex recognition and potential sterilization, which occurs in sex reassignment surgeries that include genital reconstruction, is a human rights violation. Trans people should be able to change gender identification on official documents without having to undergo sex reassignment surgery. This policy would minimize employment and societal exclusions for those who are not keen, ready, or financially able to undergo such a surgical procedure. Explicit legal employment protections against discrimination on the grounds of gender identity should become mandatory.”