UN interventions: Is it all about geography? 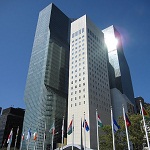 Twenty years after the Rwandan Genocide, many people discuss about the lessons to be drawn: Why have the United Nations refused to intervene militarily, although half a million people were killed? Why, in contrast, have the Yugoslavian Wars received much greater attention from the international community?

In a new IZA discussion paper Juan C. Duque, Michael Jetter and Santiago Sosa put forward a hypothetical answer to these questions: Rwanda was ignored because of its geographic location. Analyzing data from 1950-2012, the authors show that for every 1,000 kilometers of distance from the three western UN Security Council members (France, UK and USA), the probability of a military intervention by the UN decreases by four percent. So it is 42 percent more likely that the UN would intervene in a conflict taking place in Mexico or Spain than in Malaysia or Indonesia.

The researchers show that the probability of military intervention increases when the conflict is especially brutal (+14-16% when there are 1,000 or more deaths in a year) and when the country is poor and small. This has no effect if the conflict is located near one of the major oil suppliers like Saudi Arabia or Kuwait.

The authors conclude that France, the UK and the US decide whether to intervene in a war for very practical reasons. The closer a conflict to their homeland, the greater the chances of success and the lower the costs. Also, in remote places there is no danger of massive refugee waves to western countries. No such geographical bias exists for non-military operations.