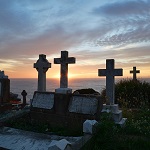 There is ample evidence that fetuses are negatively affected by diseases and other health issues of the mother. But little is known about babies’ reaction to psychological problems of the mother during pregnancy.

In a new IZA Discussion Paper, Sandra E. Black, Paul J. Devereux and Kjell G. Salvanes show that the death of a grandparent during gestation is associated with worse health outcomes for the fetus. The researchers focus on Norwegian mothers with at least two children and compare siblings to avoid selection problems. Women experiencing their parents’ death during pregnancy are not a random sample because poorer families have a lower life expectancy, suggesting that parents are more likely to die relatively young.

The negative health effects are small but significant: On average, newborns that recently lost one of their grandparents are one millimeter shorter and weigh 23 grams less. The differences are larger for boys than for girls. However, the authors do not find any negative long-run effects, for example on future earnings or the probability that the baby will obtain a high-school diploma later in life.

Interestingly, the negative findings are driven by grandparents’ deaths due to heart attacks. So unexpected losses seem to stress mothers much more than deaths because of cancer. Possible channels through which the babies’ health could be affected are a weakened immune system of the pregnant mother and her tendency to start smoking or drinking in order to deal with the grief.