When the crowd goes wild: Home advantage in same-stadium derbies 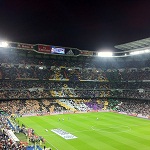 The football matches between Inter and AC Milan or between Lazio and AS Rome belong to the most prestigious in Europe. Not only because of the long-standing rivalries of the clubs, but also because they share the same stadium: In Milan the derbies are played in Stadio Giuseppe Meazza, while in Rome the Stadio Olimpico is the venue.

One could think that due to these circumstances there should be no home advantage for any of the teams in these matches. But in a new IZA Discussion Paper Michela Ponzo and Vincenzo Scoppa provide strong evidence against this. Looking at all same-stadium-derbies in Italian Serie A from 1991 on, they find that the club defined as home team has a fifteen percent higher probability of winning the game, controlling for team quality, recent results, etc. This estimate is smaller than the usual home advantage (+23 percent probability of winning), but still highly significant.

Generally there are three factors helping the home team: The crowd support, the familiarity with the stadium and the possible travel fatigue of the visitors. The last two points are eliminated in same-stadium-derbies. Because the home team usually gets much more tickets while fans of the visiting club have to gather in certain small areas of the stadium, the researchers are able to measure the “pure effect” of crowd support.

This effect can be distinguished in two factors: First, the cheering of the crowd tends to motivate the players of the home team. And second, also the referees seem to be influenced. The authors show that the home team gets awarded penalties significantly more often, while visitors collect more red cards.

IZA Discussion Paper No. 8105 Does the Home Advantage Depend on Crowd Support? Evidence from Same-Stadium Derbies Michela Ponzo, Vincenzo Scoppa