Four IZA network members among the Citation Laureates for 2022 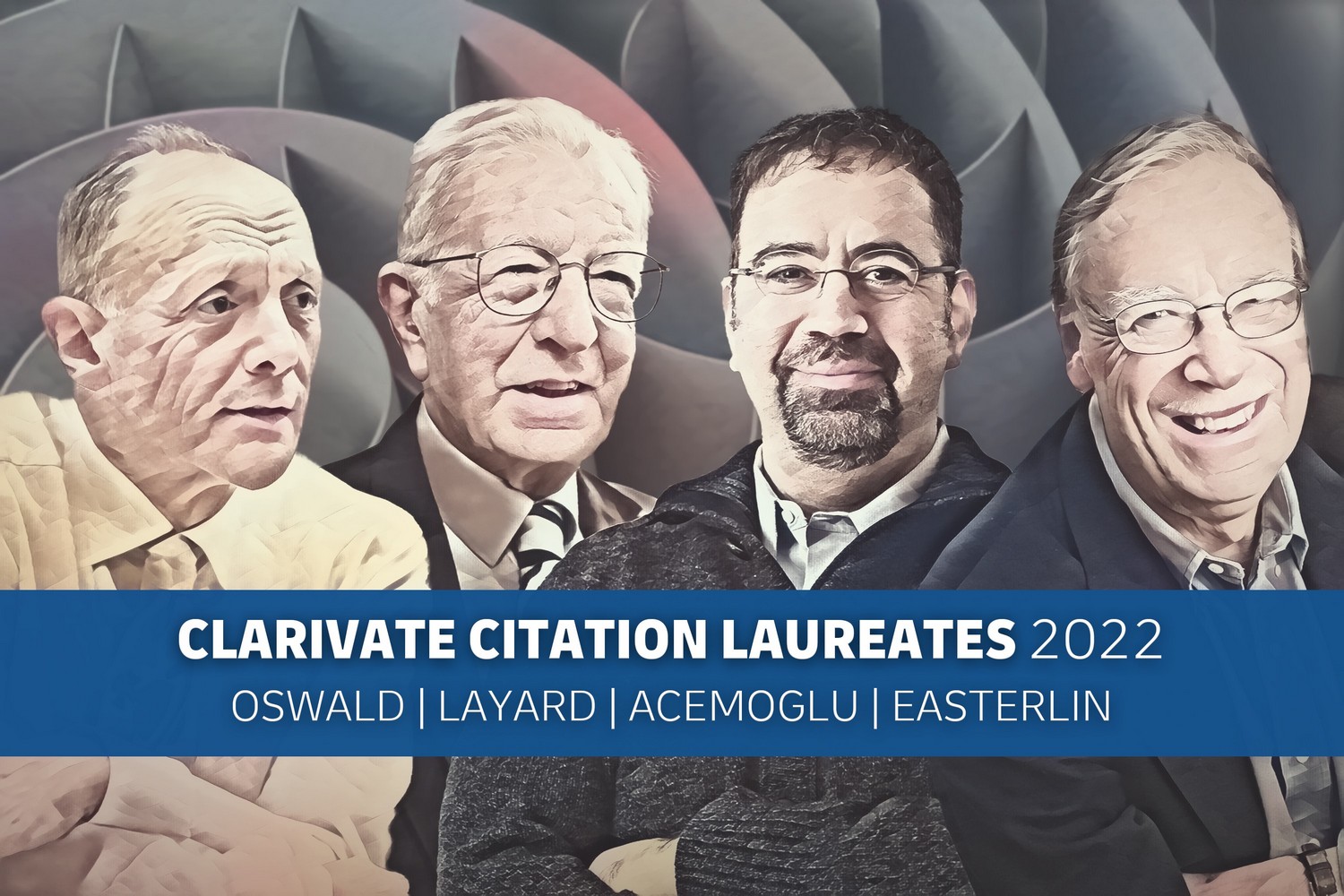 IZA Research Fellows Daron Acemoglu, Richard Easterlin, Richard Layard and Andrew Oswald have been selected as Clarivate Citation Laureates for 2022. Based on their exceptional citation record, Easterlin, Layard and Oswald are recognized “for pioneering contributions to the economics of happiness and subjective well-being” while Acemoglu is honored together with Simon Johnson and James Robinson “for far-reaching analysis of the role of political and economic institutions in shaping national development”. (See the Clarivate press release for more details.)

The quantitative and qualitative analysis that underpins the selection of Citation Laureates reveals the critical contributions they have made, reflected in the influence they have had on others’ work.  Over the past 20 years, 64 Citation Laureates have gone on to become Nobel laureates – including IZA Fellows Joshua Angrist and David Card, who had been among the 2013 Citation Laureates and became co-winners of the 2021 Nobel Prize in Economics.

About the 2022 Clarivate Citation Laureates from the IZA Network

Daron Acemoglu is a Professor of Economics at MIT. One of the world’s most cited economists, he currently ranks third in the RePEc author ranking. His research covers a wide range of areas within economics, including political economy, economic development and growth, human capital theory, growth theory, innovation, search theory, network economics and learning.

Much of his work is concerned with questions of poverty and inequality. With regard to the future of work, two of his recent IZA Discussion Papers (featured in the IZA Newsroom: The wrong kind of AI?) study the consequences of artificial intelligence and automation technologies for future labor demand and labor market inequalities.

Richard A. Easterlin is university professor emeritus of economics at the University of Southern California. Having joined IZA as a Research Fellow in November 1999, he was awarded the 2009 IZA Prize in Labor Economics for his outstanding research on the analysis of subjective well-being and on the relationship between demographic developments and economic outcomes.

The founding father of happiness economics (his key papers are presented in the IZA Prize book Happiness, Growth, and the Life Cycle) was the first to describe what came to be known as the “Easterlin Paradox.” It states that at a point in time happiness varies directly with income, both among and within nations, but over time the long-term growth rates of happiness and income are not significantly related. Easterlin identified social comparison as the principal reason for this contradiction. In several of his 16 IZA discussion papers (including The Easterlin Paradox and Paradox Lost?), he defends his findings against critics.

One of his most recent contributions is summarized in the IZA Newsroom: The Newest Revolution? Happiness!

Richard Layard is Emeritus Professor of Economics at the London School of Economics, where he co-founded the Centre for Economic Performance and co-directs its Community Wellbeing program. He joined IZA as a Research Fellow in January 2004 and was awarded the 2008 IZA Prize in Labor Economics together with Stephen Nickell for their path-breaking work on the relationship between labor market institutions and unemployment.

For most of his life, Layard has worked on how to reduce unemployment (his key papers are presented in the IZA Prize book Combatting Unemployment) and inequality. He is also one of the first economists in Europe to work on happiness, and his main current interest is how better mental health could improve our social and economic life. See, for example, his IZA World of Labor article The economics of mental health and several of his IZA discussion papers on the topic, such as Mental Illness and Unhappiness or Do More of Those in Misery Suffer from Poverty, Unemployment or Mental Illness?.

Andrew J. Oswald is Professor of Economics and Behavioural Science at Warwick University. He has been among the most active and influential members of IZA’s international research network ever since he became an IZA Research Fellow in October 1999. From May 2011 until December 2012 he was Visiting Research Fellow and Acting Director of Research at IZA in Bonn. He is currently a member of IZA’s Scientific Council.

Oswald’s research lies at the borders between economics, psychology, epidemiology and medicine. He is also involved in research on climate change and serves as IZA’s Special Representative on Climate Change and the Labor Market (see also his recent papers Why Do Relatively Few Economists Work on Climate Change? A Survey and Do Europeans Care about Climate Change? An Illustration of the Importance of Data on Human Feelings).

Among the nearly 60 IZA Discussion Papers co-authored by Oswald to date, recurring topics are happiness, well-being and human feelings in general, see for example a recent paper covered in the IZA Newsroom (It hurts to be economically insecure).