Do people discriminate others or favor their ownkind? 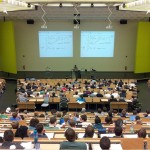 Discrimination is omnipresent in today’s labor markets: women receive lower wages, foreigner are less likely to be hired. While the broad definition of discrimination is clear (‘the minority suffers compared to the majority’), there is no evidence on whether the differences arise because people really discriminate against others or because they favor their own kind.

This distinction can, however, affect wage gaps and other important labor market outcomes. A new IZA Discussion Paper by Jan Feld, Nicolas Salamanca, and Daniel S. Hamermesh investigates this question by conducting a field experiment at Maastricht University in The Netherlands. In the experiment, the authors have some exam
papers written without student names on the front page, others with. Graders were randomly assigned to students’ exams that did or did not contain the students’ names.

The paper shows that graders substantially favor students of their own nationality but do not discriminate against people of a different nationality. While there is neither favoritism nor discrimination by gender, the authors do show that more experienced graders and those who are worse teachers favor people like themselves the most. Thus, the methodology and results of the experiment suggest that favoritism and discrimination are not opposite sides of the same coin, but rather distinct concepts.

In the experiment, unequal treatment of students is caused by favoritism rather than discrimination. If this finding carries over to the labor and other markets, it might have an important policy implication: moral suasion stressing to members of the majority group that minority-group members are not “bad” might, for instance, be ineffective.