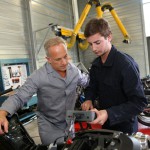 Rising levels of income inequality in many developed countries have led to much political and scientific controversy. One of the empirical challenges is to identify the causes and drivers of inequality. A new study by German economists Albrecht Glitz (Universitat Pompeu Fabra and IZA) and Daniel Wissmann (LMU Munich) investigates how shifts in skill premiums – the wage difference between skilled and unskilled workers – can help explain income inequality between different skill and age groups.

The authors show for Germany that the wage differential between medium (those with vocational training and/or Abitur) and low-skilled workers (those without a post-secondary degree) decreased slightly over the 1980s and then increased by a third from 18% to 24% since the late 1980s (solid line in graph), while the high skill premium, i.e. the wage differential between those holding a college or university degree and those with vocational training, followed a U-shape pattern over the same period (Figure 1).

But not all medium-skilled workers benefited from this rise in the skill premium, which is apparently attributable to a pronounced increase in the medium skill premium of young workers (aged 30 and below). 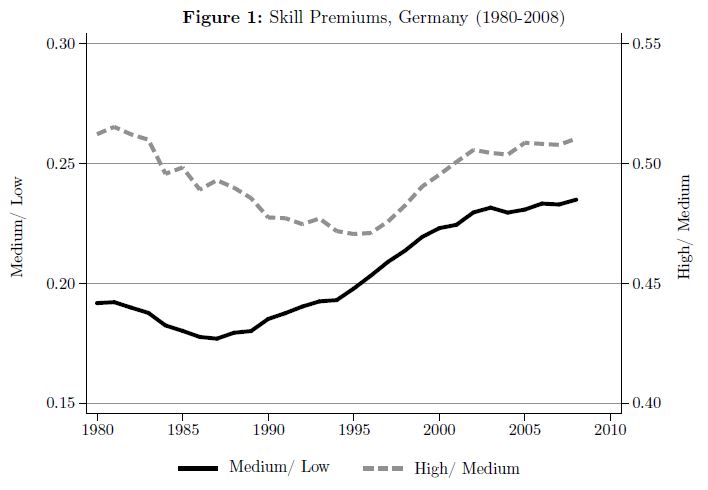 According to Glitz and Wissmann, these differences in the development of wage premia may simply be due to the relative abundance of workers with a specific skill level. Analyzing long-term education trends in Germany for those born between 1950 and 1981, the authors find a pronounced trend break in the educational attainment of the West-German population: relative to previous trends, the shares of both high- and low-skilled individuals increased while the share of medium-skilled individuals declined markedly.

The authors conclude that a considerable part of recent changes in earnings inequality between different skill groups in Germany are the result of longer term educational choices of the population and hence, ultimately, driven by labor supply. With this explanation, the authors complement recent attempts focusing on demand-side explanations of rising inequality, such as technological change and the role of globalization in the vanishing of manual, routine-intensive occupations.