How preschool helps to fight inequality 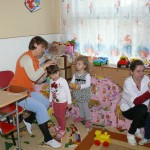 The widening wage gap between college educated and non-college educated workers in the US and around the world has raised the question of how education policy can effectively mitigate this trend is highly topical. A new IZA discussion paper by Nobel Prize Laureate James J. Heckman and Lakshmi K. Raut gives a clear answer: intervene early and send children to preschool. The authors show that attending preschool has long-term positive effects on school performance and labor market success — in particular for economically disadvantaged children. The paper finds that preschool strongly boosts cognitive and socialization skills, which themselves have positive effects on the level of schooling and the labor market earnings of individuals. Given these findings, the authors demonstrate the beneficial effects of a policy that could reduce the wage inequality between high and low-skilled workers in the long tun. Publicly providing preschool to economically disadvantaged children would (a) increases the probability of children with poor parents not to end up poor themselves, (b) increases the probability of children of non-college educated parents to attend college, (c) increases the college completion rate of the children of non-college educated parents, (d) reduces earnings inequality, and (e) would yield a net gain for society by increasing long-run per capita earnings even after taking into account the costs of such a reform.