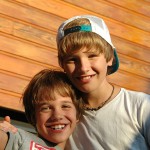 How much a younger sibling’s school achievement is affected by his/her older sibling’s achievement at school is an important question to answer as it helps us understand whether investments in children may have multiplier effects through their impact on younger children. Cheti Nicoletti and Birgitta Rabe are the first to investigate this “sibling spillover effect” in a new IZA paper.

When trying to assess the extent of any sibling spillover effects, it is important to distinguish the direct influence of the older to the younger sibling from any similarities in their exam grades that are caused by the fact that they come from the same family and are likely to go to the same school. Nicoletti and Rabe do this by combining several techniques known to economists.

The spillover effect is larger for siblings in families eligible for free school meals, living in deprived neighbourhoods and speaking a language other than English at home. This means that children from more deprived backgrounds benefit more from a high attaining older sibling than children from more affluent backgrounds.

It may be that the effect arises through information sharing about educational choices and schools/teachers. Information on this is likely harder to come by in poorer families, and the benefit to younger children therefore high. The findings of the study indicate that siblings can play an important role in conveying education-related information in families where parents have less access to such information. This suggests that investments into children from deprived families can have considerable multiplier effects on younger siblings.