On occasion of German Reunification Day: New Article on “Children of the Wall” 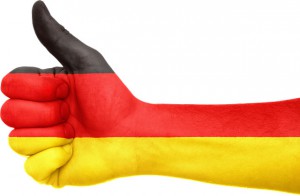 Today marks the 25th anniversary of German reunification. The signing of the German unification treaty had set in stone what Germans had not expected, but long desired: the unity of the German people. At the time, former German Chancellor Willy Brandt marked the iconic words: “Now what belongs together will grow together”. For this statement to become true, Germany had to make unprecedented efforts with regards to institutional, economic and societal unification. Especially in East Germany, the transition from a socialist planned economy to a free market economy had profound implications for the labor market and affected every aspect of life. Over the last ten years, the IZA has accompanied this process with various economic studies. One of the most recent contributions is a study by Arnaud Chevalier and Olivier Marie, to be published in the Journal of Political Economy, which analyses the effects of the ‘fertility shock’ that followed the fall of the Berlin wall.

Of the many areas that were affected by the collapse of the German Democratic Republic (GDR), demography was probably one of the least regarded. But the demographic ramifications were profound: Following the collapse of the Communist regimes, fertility in Eastern Germany dropped by 50% in the first three years, which has been described by demographers as the most substantial fall in birth rates that ever occurred in peacetime. For the IZA researchers, this provided a unique “natural experiment” that could be used for their study. In a first step Arnaud Chevalier and Olivier Marie sought to find out, which part of the population decided against parenthood in the wake of the GDR’s collapse. Next, they wanted to better understand the link between the fertility decision and the future developments of these ‘Children of the Wall’ (children born in East Germany between 1991 and 1993).

They found out that women, who gave birth during this period of economic and political uncertainties were on average younger, less educated, and more likely to be unmarried mothers. These are typical traits associated with lower “parental skills”, which lead their children to display worse outcomes on various socio-economic measures, including criminal participation. In their paper, Chevalier and Marie show that the offending behavior of the ‘Children of the Wall’ is much worse than could be expected. From age eight onwards, they exhibit arrest rates at least 50 percent higher than comparable peers. They explain this with the fact that parents who decided to have children amid the uncertainty of the GDR collapse were much worse in building up strong personal bonds to their children. At age 17, Children of the Wall are relatively similar to their peers in terms of broad educational attainment measures, but they report significantly worse emotional relationships with their parents. Chevalier and Marie also considered the risk attitude of mothers and children, which may have a strong impact on both fertility and offending decisions. They found that the women who gave birth just after the end of Communism in East Germany are much more willing to take risk and this is also true for their children. The findings of their study fit well with recent evidence on inter-generational risk attitude transmission and form perhaps one of the crucial pieces in understanding the fertility-crime relationship puzzle.

Beyond demography, IZA research on German reunification has mostly focused on the labor market consequences of the transition process. Ten years after unification, Holger Bonin and Klaus F. Zimmermann critically reviewed the effectiveness of labor market policies and job creation and training programs. In 2002, Paul Frijters, John P. Haisken-DeNew and Michael A. Shields touched upon the sensitive issue of East German welfare expectations after reunification and found that East Germans significantly over-estimated the welfare gains in the newly united German State. Axel Heitmueller and Kostas G. Mavromaras analyzed, how public and private pay in Germany developed in the 1990s, finding that wage convergence took place only in the public sector, while a pay gap between East and West remained in the private sector. In 2006 Dennis J. Snower and Christian Merkl provided a sober assessment of the East German labor market, suggesting that some of the problems have been aggravated by various well-intentioned forms of “care”, such as support in bargaining, unemployment benefits and job security provisions. The question of life satisfaction after unification was tackled several times by the IZA research community. The 2006 study by Richard A. Easterlin and Anke C. Zimmermann provides a detailed account of the wellbeing of different demographic groups in both East and West Germany. Differences in life satisfaction between east and west remain until today: This year’s paper by Christian Pfeifer and Inna Petrunyk reports that on average life satisfaction remains lower in the East, but the East-West gap continues to decrease for younger birth cohorts.