Should housework be shared more equally between partners? 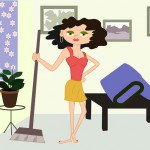 Women do more housework than men. For most of history this phenomenon went largely unremarked. Housework was what women did, while men supported their families with paid work. However, the role of women has been changing: women’s educational levels are now at least as good as those of men; most women do paid work for most of their adult lives; and although gender pay gaps still exist, women’s earnings (in particular, the earnings of younger childless women) have been gradually approaching those of men. While things have also been changing in the domestic sphere, with men doing an increasing share of housework and childcare, surveys still show that women do the lion’s share of housework – even in households where both partners have full-time paid jobs.

Several theories have been proposed as to why unequal shares of housework have persisted even in the context when women do about as much paid work as men. The full range of these theories is discussed in a new IZA paper. The work by Katrin Auspurg, Maria Iacovou and Cheti Nicoletti investigates one strand of theory, namely the suggestion that men and women have systematically different preferences over housework because of internalized gender norms. Variants of this theory, which essentially proposes that women like housework more (or dislike it less) than men do, have been put forward by both economists and sociologists.

Previous attempts to test this theory empirically have been based on information on reported satisfaction or well-being gathered from surveys. These potentially suffer from a number of problems. First, surveys find so few households in which the man does most of the housework that it’s impossible to obtain reliable estimates of how people feel about these arrangements. Second, there is a potential problem of post-hoc rationalization – it’s likely that reported preferences are affected by people making the best of the situation in which they actually find themselves. And third, because preferences may be affected by some of the same factors which drive the amount of housework that people do, it’s almost impossible to work out the direction of any causal relationships.

The new paper takes a different approach, using data from an experiment conducted in the course of the Innovation Panel of Understanding Society. Men and women were presented with hypothetical scenarios (“vignettes”) in which several factors varied: the distribution of housework; the distribution of paid work; earnings; the presence of children; and whether the couple had paid help with housework. Each respondent was presented with three different scenarios, and was asked to rate how satisfied they would be with each scenario on a scale from 1 (completely dissatisfied) to 7 (completely satisfied). In all, 4,547 valid responses were obtained from 1,609 respondents.

The results show that:

(3) Men’s and women’s preferences are remarkably similar over virtually the entire range of possible scenarios. The only discernible difference between the sexes is that women are less favorably disposed than men to working full-time themselves while their partner works part-time. But this difference is small and relates to paid work rather than housework.

The authors therefore conclude that there is no evidence that preferences over housework differ between the sexes as the result of internalized gender norms, and that the reasons behind the gendered allocation of housework must lie elsewhere, perhaps in the different bargaining strategies employed by men and women.