The stress cost of children: Time matters more than money 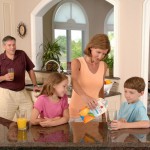 Stress can be viewed as reflecting the limits on time and money that life imposes. Numerous studies have measured the money cost of having a child (close to $250,000 per child according to recent U.S. estimates), and some others have measured how much parental time children take up. A new IZA paper examines a third dimension of the cost of children – how much additional stress on parents’ time and finances they impose.

Using data on families in the Australian HILDA Survey for 2001-12 and the German Socioeconomic Panel for 2002-12, Hielke Buddelmeyer, Daniel S. Hamermesh and Mark Wooden demonstrate that a birth substantially raises parents’ stress about time, that the effect lasts at least several years, and that it is much larger on the mother than the father. A birth also raises people’s stress about their finances, but those effects are much smaller than on time stress. In monetary terms, the stress cost of a child is very large.

When a child leaves the house as an adult, parents’ time and financial stress decrease, but that effect is much smaller than the increase in stress produced by having a small child in the household.

“The clear implication is for more sharing of parental responsibility for children between father and mother. Beyond that, countries need to offer more aid to new parents – not just money, but especially time off,” says Dan Hamermesh.