Climate change is considered one of the major challenges of the 21st century. While politicians and scientists at the COP23 climate change conference in Bonn are currently debating the political implications, economists have looked into the various economic consequences of global warming. Three papers co-authored by IZA’s “Environment and Labor Markets” Program Coordinator Olivier Deschenes investigate the impact of rising temperatures on productivity, birth rates and mortality.

Chinese manufacturing output could fall by 12% per year

Based on historical and projected future climate data, the authors calculate that until the 2040-2059 period, average temperatures in China will increase by 3.6°F (2.0°C). As the map shows, more extremely hot days are to be expected especially in eastern and southern China.

The findings of IZA Discussion Paper No. 9480 show that demography is also affected by global warming. The authors, Alan Barreca (Tulane University & IZA), Olivier Deschenes, and Melanie Guldi (University of Central Florida), conclude that increased temperatures due to climate change may reduce population growth rates over the course of the century. They estimate the effects of temperature shocks on birth rates in the United States between 1931 and 2010 and find that additional days above 80°F (27° C) cause a large decline in birth rates approximately 8 to 10 months later.

For more information on this topic, see the IZA World of Labor article by Alan Barreca: Does hot weather affect human fertility? 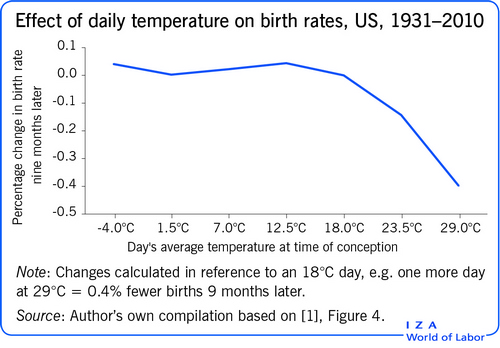 The paper shows that the mortality impact of days with a mean temperature above 80° F has declined by about 70% after the 1960s. The results show that the drop in mortality can almost entirely be explained by the adoption of residential air conditioning in the US. In contrast, electrification and access to health care were not significantly related to changes in the temperature-mortality relationship.

The authors conclude that existing technologies (such as residential air-conditioning) offer tremendous opportunities to mitigate the impact of climate change. At the same time, greater use of energy-intensive adaptations may speed up the rate of climate change because electricity production worldwide continues to be primarily driven by the combustion of fossil fuels. “The continued expansion of the renewable energy sector and the development of more efficient adaptation technologies should also be key components of the world’s climate change strategy,” says Olivier Deschenes.