Immigrants typically do not settle evenly across the countries in which they move. Rather, they tend to cluster in particular neighborhoods. In public discourse these ethnic enclaves are often seen as an inhibitor to societal and labor market integration. Statistics show that employment rates of immigrants are lower than those of natives in most countries that receive immigrants (see graph below). 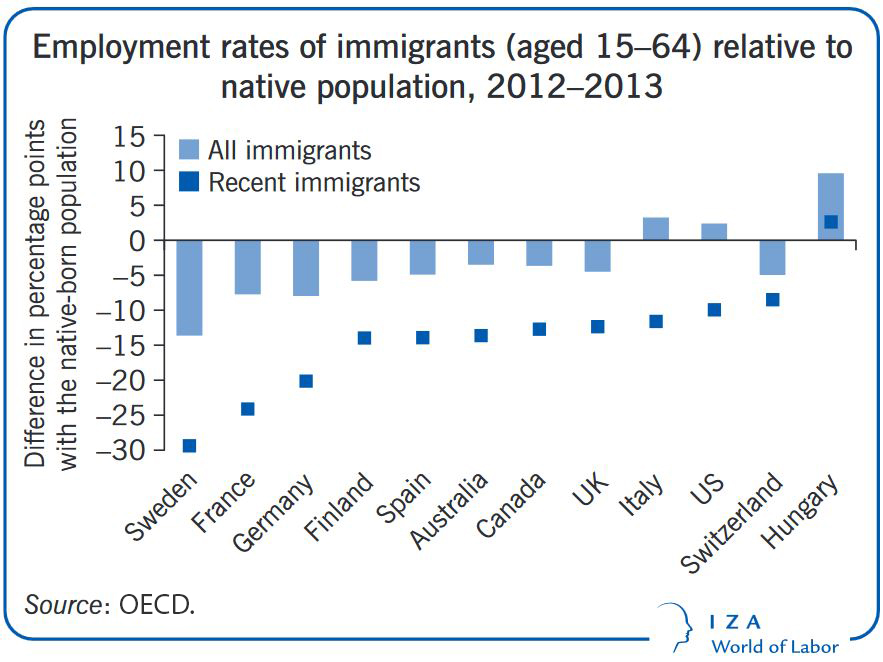 But does clustering in ethnic enclaves actually help explain the persistent differences in employment rates and earnings between immigrants and the native population?
An IZA World of Labor article by Simone Schüller (Ifo Institute, FBK-IRVAPP, and IZA) scrutinizes existing studies on the topic and provides advice for immigration policies that make use of the potential of these neighborhoods on immigrants’ economic integration.

The true effects of ethnic enclaves on immigrants’ labor market outcomes are far from obvious. On the one hand, immigrants can profit from living in an enclave. Social networks within the community can provide immigrants with valuable information about job opportunities and provide shelter from discrimination, both of which could be conducive to labor market success.

At the same time, ethnic enclaves might hamper immigrants’ economic assimilation into broader society. An enclave economy can only offer a limited number of jobs, usually with below-average wages. Enclaves might also become “mobility traps” in the long term by reducing the incentives for immigrants to acquire important skills necessary in the host country, especially language skills.

Schüller’s article shows that immigrants can benefit from living in an ethnic enclave if the other immigrants living in the neighborhood are well-educated, work in well-paid jobs, and if the employment rate in the community is high. On the contrary, low levels of employment and education might significantly harm labor market outcomes for immigrants. Hence, labor market integration could improve if newly-arriving economic migrants, refugees, and asylum-seekers settle in neighborhoods with relatively high average education levels and relatively high employment rates among the co-ethnic population.

Possible policies might include a targeted geographical allocation of incoming refugees and asylum-seekers across areas according to socio-economic characteristics, such as education levels and employment rates of the resident ethnic populations. With respect to labor migrants, policy makers should opt for measures that encourage and incentivize especially the low-skilled immigrants to settle in regions with relatively high employment rates and education levels among co-nationals.

Overall, enclave quality (measured in terms of levels of income, standards of education, and rates of employment) is more important than enclave size for driving economic success. Therefore, Schüller advises policy makers to focus less on avoiding ethnic “ghettoization” per se, but instead aim to discourage socioeconomic residential segregation and implement housing policies that promote mixed residential areas in terms of high- and low-skilled workers.