Living with a stranger: The “Retired Husband Syndrome” in Japan 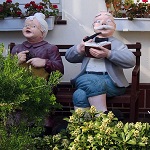 Retirement is not just a major turning point in the life of a working man, but it often affects his entire family – and not in a good way. Many wives suffer from headaches, sleeplessness and other symptoms of anxiety or depression after their husbands have ended their careers. This phenomenon is known as the “Retired Husband Syndrome” (RHS). It is especially prevalent in societies with traditional gender roles like Japan.

The situation has been well documented anecdotally: All of a sudden, the husband stays home all day, gets all grumpy and demanding, and basically turns his wife’s daily life into a nightmare. She was used to having the day to herself, and now she is forced to put up with him 24/7. But despite wide media coverage on this topic in Japan, it has never been formally investigated whether (and to what extent) retirement itself has a direct causal effect on a severe deterioration of mental well-being.

In a new IZA Discussion Paper, Marco Bertoni and Giorgio Brunello look into this matter. Using an annual survey conducted on a representative sample of the Japanese population – with detailed information on individuals and their spouses, including retirement, divorce and self-reported measures of depression, stress and lack of sleep – the authors indeed find a strong negative effect of husbands’ retirement on wives’ mental health.

The causal effect is identified using the exogenous variation generated by a 2006 reform which mandated Japanese employers to guarantee continuous employment between mandatory retirement age (at age 60) and full pension eligibility age – effectively raising the average retirement age. The analysis of the different age cohorts shows that an additional year spent in retirement by Japanese husbands increases the probability that their wives develop RHS by 5.8 to 13.7 percentage points, depending on the underlying model.

One might think that wives are better able to cope with their husband’s retirement if they work themselves rather than stay home. However, the study shows that the opposite is the case: The retirement effects are even stronger for employed women, who are already stressed by their job and have less time to comply with the additional requests by their retired husbands. Increasing female labor force participation is therefore unlikely to stop the diffusion of RHS in Japan.

Husbands, by the way, show similar symptoms themselves. But the survey data used does not allow any conclusions whether wives are more likely to develop RHS after their husband’s mental health has deteriorated due to retirement. Nonetheless, the authors highlight the need to study retirement as a joint process affecting the couple:

“While much debate surrounding retirement in economics is centered around the financial preparedness to retire, our results suggest that attention should also be paid to preparing for retirement from a psychological point of view, so as to avoid or attenuate the consequences on the mental health and well-being of both partners.”