Does the racial mix of students’ classmates affect their behavior later on in life? A new IZA Discussion Paper by Luca Paolo Merlino, Max Friedrich Steinhardt and Liam 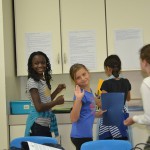 Wren-Lewis compares American students, contrasting those who happen to be in an age group with fewer blacks in their class compared to other classes in the school.

The study finds that white students with more black classmates are more likely to cohabit and have children with a black partner later on in life. The effect is driven by a change in racial attitudes: These students are less prejudiced, and as adults they are less likely to think that race is an important factor within a relationship.

Class composition thus affects relationships formed many years after school, implying that the increase in mixed-race relationships is not simply driven by students meeting more black partners in school or via school friends.

The results suggest that racial diversity in schools can help lead to positive changes in attitudes and behavior towards members of other races.