Peer effects at work are smaller than often suggested 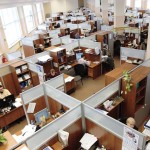 Whether such spillovers in productivity exist, and what are the channels, is not only important for our understanding of the wage setting process and the hiring policy of the firm, but has also implications for wider issues such as wage inequality. Despite the potentially important implications of spillovers in the workplace, empirical evidence on this question is still scarce. The existing empirical literature on productivity spillovers in the workplace is so far restricted to only to a handful of studies referring to very specific settings, such as supermarket cashiers, soft fruit pickers, teachers or scientists.

In a new IZA discussion paper, Thomas Cornelissen, Christian Dustmann and Uta Schönberg go beyond the existing literature and investigate peer effects in the workplace for a representative set of workers, firms, and sectors of a large local labor market over two decades. Further, the authors focus on peer effects in wages rather than productivity. The researchers find only small peer effects in the labor market in general, as well as in highly skilled occupations. Hence, the larger peer effects established in specific settings in existing studies do not carry over to the labor market in general. This is an important finding, and suggests that – overall and for high skilled occupations – peer effects contribute little to wage inequality. In low-skilled occupations, in contrast, peer effects are sizable, indicating that a 10% increase in co-worker quality increases a worker’s own wage by 0.6-0.9%. The authors present several pieces of additional evidence suggesting that social pressure is the primary source of these peer effects.