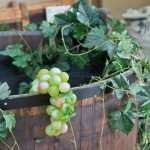 Between 1863 and 1890, phylloxera (an insect which attacks grapevine roots) destroyed about 40% of the French vineyards. The crisis could only be stopped when vineyards were replanted with hybrid American vines which were resistant to the insect.

This poor harvest induced a large productivity shock in the 19th century French economy that was still largely dependent on agricultural production (accounting for 30 percent of GDP at the time). Local credit markets, which could have alleviated the crisis, collapsed and the modern welfare state was not yet established. For a large share of the population, this meant a huge negative income shock.

The fact that phylloxera affected the different départements in different years offer a natural experiment to explore the effects of this negative income shock on property and violent crime rates, as done by Vincent Bignon, Eve Caroli and Roberto Galbiati in their new IZA Discussion Paper.

The results: Full contagion by phylloxera in a département on average increased property crime rates by 18 percent whereas violent crime rates dropped by about 12 percent. The authors show that the latter decrease really is driven by the drop in wine supply. The crisis lowered the consumption levels of alcohol, making the people less receptive for violence.