Workers bear most of the corporate tax burden 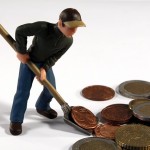 orporate taxes reduce wages? While this question has heavily been discussed in economics since the 1960s, compelling empirical evidence is still scarce. In a new IZA discussion paper, Clemens Fuest, Andreas Peichl and Sebastian Siegloch exploit the specific institutional setting of the German local business tax — the most important German profit tax — to provide new answers to this old question. The authors use annual changes in the local business tax rates set by 11,441 German municipalities to show that a one euro increase in a firm’s annual tax liabilities yields a decrease of the annual wage bill of 50 to 75 cents. This means that raising one euro of corporate tax revenue reduces local wages by up to three quarters of the revenue raised. The authors only find a negative effect on wages if firms are under a collective bargaining agreement. If workers are not represented by a trade union, the local business tax has no effect on the wage. The reason for this finding: workers which are represented by a trade union receive higher wages and have more to lose if corporate taxes increase. Consequently, high and medium-skilled workers experience relatively higher wage losses than low-skilled workers if corporate tax rates increase.

In the public and political debates, arguments in favor of (higher) corporate taxes are often based on redistributive motives: allegedly rich firm owners are supposed to contribute to financing public goods and social safety nets by paying their fair share of taxes. Opponents of high corporate taxes often claim that eventually the tax burden is (fully) shifted to labor, being immobile in an international context. The findings by Fuest, Peichl and Siegloch shed new light on this debate and show that the shifting of the corporate tax burden is more complex. First, if workers receive relatively high wages — e.g. through collective bargaining agreements –, they are likely to suffer from higher corporate taxes through wage decreases. If wages are low, employees do not have much to lose. Second, the analysis suggests that local corporate taxation might offer a possibility to prevent firm owners from shifting large(r) shares of the tax burden to workers. If labor is regionally mobile, competitive wages are determined within the regional or even the national labor market and should hardly respond to the tax changes in a small jurisdiction.